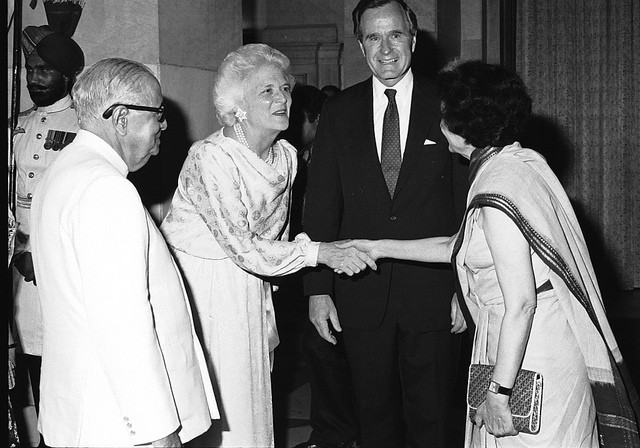 New York, Dec 1
George Herbert Walker Bush, who deftly steered the US through the epoch-making upheaval that ended with the end of the Soviet Union and the emergence of his country as the dominant world power as President from 1989 to 1993, died a day earlier in Houston.

The 94-year-old patrician, who embodied the "kinder, gentler" version of his Republican Party at home and could gently manoeuver through the debris of what was the Soviet Union ending the four decades of Cold War, showed steely resolve when he took on Iraqi leader Saddam Hussain in 1991 to liberate Kuwait.


These incidents will be the epitaph of his single-term presidency that ended with his defeat in 1993 at the hands of Bill Clinton in a three-way race where he was undermined by another conservative, Ross Perot.

Bush Sr. glories abroad and his "Thousand Points of Light" campaign at home promoting volunteerism and compassion were overshadowed by a sense of economic foreboding and a feeling that the nation was adrift domestically that led to his defeat.

A characteristic trait of Bush Sr -- a World War II Navy aviator, a former Central Intelligence Agency head and Washington's envoy to Beijing -- was his understanding of the limits of military might and uses of diplomacy and tact which some of his successors, notably his son George W. Bush, lacked with disastrous consequences.

As the Soviet Union unravelled under Mikhail Gorbachev, rather than go for the jugular Bush Sr. helped foster an orderly transition taking care to reassure Moscow while backing its breakaway constituents on their way to independence and democracy and ensuring that the nuclear arsenals and their management were secured.

Once Iraq, which had invaded Kuwait, was pushed out of the oil shiekhdom during a brutal war that saw tens of thousands of Iraqis killed, Bush Sr. called a halt despite the US hawks demanding that US troops go all the way to Baghdad and depose Hussein.

History would endorse his caution: His son George W. Bush ventured into a war against Hussein in Iraq plunging the Middle East into an ongoing crisis.

Drawing on his experience in Beijing, Bush Sr. built the US ties with China as it embarked on a transformation that would make it a challenger to America in the next century.

Bush Sr. had limited engagement with India during his presidency, absorbed as he was with Europe and the Middle East.

He visited India in 1984 when he was the Vice-President and met then Prime Minister Indira Gandhi.

Failure to pay attention to Afghanistan was one of the shortcoming of his presidency that came to haunt his son as President.

After the Soviet Union withdrew from Afghanistan following its defeat in a guerrilla war of attrition by US-backed Islamic mujahideen during the first year of his presidency, Bush Sr. left the country adrift to become a haven for Islamic terrorists who attacked the US in 2011 when his son was President.

This aspect of history would repeat itself as his son would also neglect Afghanistan after an initial victory over the Taliban and the Al Qaeda terrorists and trap the US in its longest war.

After his war service and a degree from Yale University, Bush Sr. left his family's traditional north-eastern niche for oil-rich Texas in the south to become a petroleum executive and later an entrepreneur and remake his identity.

Born as the son of Senator Prescott Bush in a politically active family, George H.W. Bush became a senator himself before his election to two terms as Vice-President with President Ronald Reagan, whom he succeeded to become the 41st President.

His son George W. Bush became the 43rd President succeeding Clinton, who had defeated his father.

Another son, Jeb Bush, became the Florida Governor and unsuccessfully tried to run for President.

George H.W. Bush, known as "Bush 41" to distinguish him from his son, who is called "Bush 43" for their respective presidencies, was fit enough into his 90th birthday to do a parachute jump to celebrate the occasion.

He later developed Parkinsons disease that forced him into a wheelchair and had a series of infections in his final years.

Bush Sr. is survived by his wife of 73 years, Barbara; his sons George W. Bush, Jeb Bush, Neil and Marvin; a daughter Dorothy Koch, and 17 grandchildren and eight great-grandchildren.

photo
Former United State President George H W Bush, who died on Friday, visited India in May 1984 when he was vice president and met with then-Prime Minister Indira Gandhi. (Photo: US Embassy)