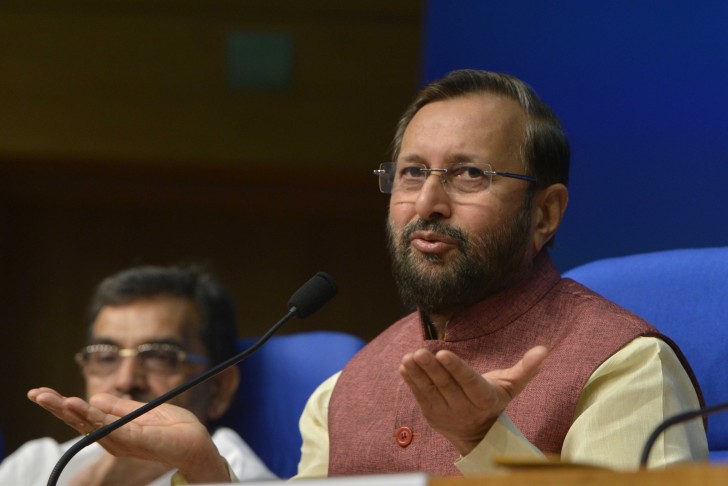 Jaipur, Dec 6
There has been a communication gap in conveying the government's welfare measures in Rajasthan and this has been addressed, Union HRD Minister Prakash Javadekar has said as the state goes to the polls on Friday to choose a new Assembly amidst reports of anti-incumbency jitters for Chief Minister Vasundhara Raje.

He also conceded that incidents of lynchings in the state were bad but the Raje government had taken swift action in those cases.


"The issue was a communication gap to an extent and we in the party forum started effective communication. The 2nd, 3rd and 4th (of November) were the three revolutionary days when millions of our workers went to more than two crore families and they saw that people were so happy with (the government's) schemes because many benefits reached the masses. They speak for those because the people are grateful and not ungrateful," Javadekar told IANS in an interview.

Beneficiaries of welfare schemes are the messengers of BJP in the elections and the poor have "decisively shifted" to the party as they see Prime Minister Narendra Modi as one of them, said Javadekar, the BJP's poll in-charge in Rajasthan.

He also said BJP was fighting the election on the issue of development. The Vasundhara Raje government has fulfilled 95 per cent of its promises and will break the jinx of past 20 years in which Congress and BJP have alternated in power after every five years.

Javadekar, who was the poll in-charge of Karnataka, where the BJP emerged as the single largest party in the polls held earlier this year, was asked about the shortcomings he saw when he was given charge of the state.

He denied that it was a difficult election for the BJP.

"Once Congress, once BJP has happened for the last 20 years. But this time we will break that jinx and we will repeat because voters overall in the country have changed. The poorer sections of society feel Modi as one of them. They have shifted decisively from Congress to BJP and, therefore, Congress which had 16 states in 2014, is now reduced to only four while the BJP, which had six states, has risen to 19. So this is the decisive shift in Indian politics and we are going to repeat it," he said.

Asked if BJP was facing anti-incumbency as it denied tickets to 43 MLAs, he said the party was facing "pro-incumbency".

"This is not anti-incumbency, this is pro-incumbency where you always change 25 per cent change of your MLAs and that is based on assessment of constituencies."

The BJP leader rejected poll surveys that have shown that Congress is ahead in the electoral battle.

"In Uttar Pradesh also, surveys were showing that BJP will win 150 seats then they said 180 seats but nobody predicted a complete victory. We got 325. Same thing will happen here and the surveys will fail," he said.

On the Congress saying that Modi's rallies made little impact as there is deep resentment against the Raje government, he said "it is sour grapes story" for the opposition party.

"Modi is the most effective communicator and people are allied with him," he said.

Javadekar also rejected Congress charge of the Raje government not fulfilling most of its promises.

"Out of 611 promises under 20 broad topics, we have delivered on 95 per cent. We challenge Congress or anybody to prove that we have not completed this because we have all the records to show and the beneficiaries are our ambassadors. They are our messengers, they are spreading the message so that the BJP repeats."

"So there is deterrence. Women are completely safe in Rajasthan," he said.

Referring to the incidents of lynching, he said the culprits were nabbed quickly and the proceedings were on fast track to give punishment.

"The way it is presented as if it is lynching of a particular community. It is not the case. The overall lynchings show that people from all religions were targeted for different reasons at different places," he said.

Javadekar said the BJP was fighting the election on the issue of development and the Raje government has "delivered on everything."

The BJP leader said that 50 lakh women have got mobiles at Rs 100, 40 lakh women have got Ujjwala (cooking) gas, 50 lakh people have got Mudra loan, 11 lakh girl children born in the last two years got Rs 2,500 immediately after birth and Rs 2,500 in the first year, high schools were upgraded in 5,000 villages, 7000 villages got cemented roads and business and tourism were growing.

"Tourism, on an average, is growing at 10 per cent but in Rajasthan it is growing at 15 per cent. The government's development programmes, infrastructure and law and order, everything is good," he said.

(Prashant Sood can be contacted at [email protected])