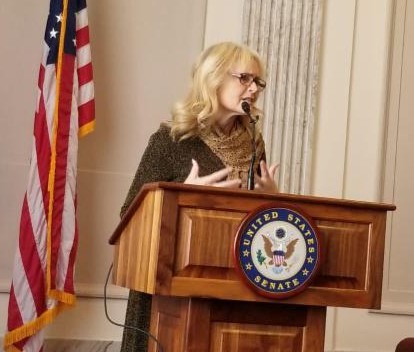 WASHINGTON, D.C. -
Religious freedom activists from across the U.S. have criticized Prime Minister Narendra Modi for his failure to stop the violence carried out by Hindutva groups against religious minorities, including Muslims and Christians.

At an event titled Religious Freedom in India: A Briefing on Capitol Hill, organized by the Indian American Muslim Council (IAMC) on the Capitol Hill in Washington D.C., the activists urged the Indian prime minister to condemn such violence against religious minorities as well as take all necessary measures to curb the rise of Hindutva extremism and punish the Hindutva groups involved in violence.


‘The failure of Prime Minister Modi to definitively condemn and to definitively distance himself from the extreme elements of his party has played a substantial and significant role in bringing about the situation that we see today,’ said Dr. Katrina Lantos Swett, former Chair of the United States Commission on International Religious Freedom (USCIRF), an independent bipartisan federal commission tasked with defending religious freedom outside the U.S.

‘Inflammatory rhetoric and a conception of India's national identity increasingly based on religion have contributed to an atmosphere of intimidation, exclusion, and even violence directed at non-Hindus,’ she added, saying Muslims and Christians are the ‘primary victims’.

Dr. Lantos Swett, who is the daughter of Tom Lantos, the only Holocaust survivor to have ever been elected to U.S. Congress and who founded the Congressional Human Rights Caucus, said India's religious freedom violation had a ‘long-standing pattern of impunity and immunity.’

‘We see it in the lack of accountability for large-scale communal violence such as the horrors we know took place in Uttar Pradesh and Gujarat, and in the more individualized crimes committed against members of minorities faiths,’ she said.

The briefing was held in a Senate Building before an audience that also included Congressional staffs, officials from the Department of State and USCIRF, and civil society members.

Jeff King, President of International Christian Concern (ICC), quoted a survey saying 82% of Indian Christians were ‘very concerned’ for their safety, 73% experienced discrimination ‘at least once’ last year, 85% saw an ‘increase in aggression’ by Hindu nationalists, and 84% said minorities were ‘less protected’ under Modi.

Matthew Bulger, Legislative Director of the American Humanist Association, a U.S. organization promoting theism and agnosticism since 1941, said that compared to global religious freedom standards, ‘India is failing’. Several Indian laws and policies ‘restrict religious freedom rights’ and have led to arrests and prosecution of individuals, ‘which is just unacceptable’.

He criticized Section 295A of the Indian Penal Code as a ‘relic’ of British colonial law and ‘essentially a blasphemy and anti-religious incitement law ‘inconsistent with the pluralistic and democratic values India publicly accepts. Laws which restrict religious freedom can serve as a catalyst for vigilante violence, such as that seen in India recently regarding the lynchings by Hindu nationalists of people, most o+ften Muslims, suspected of smuggling or killing cows.’

Bulger noted that although Pehlu Khan, a Muslim dairy farmer murdered by cow vigilantes in April 2017, named six suspects in his ‘death-bed statement’ criminal charges against them were dismissed. ‘Sadly, this is not an isolated case, as over a dozen similar murders have happened in the last two years alone.’

Rev. Sarah C. Anderson-Rajarigam, a Dalit Christian Lutheran church priest from Philadelphia, said the status of Dalits had worsened under the Modi government. ‘Modi's government has deliberately and openly made violence against Dalits a non-issue by offering impunity.’

The perpetrators of violence against Dalits were not only free but ‘elevated to the status of a hero’, she said, adding: ‘The patter of violence continues unabated... But there is no shame experienced either by the perpetrators or by Prime Minister Modi and other ministers.’

Pawan Singh, a Sikh representing the Organization for Minorities of India, said the ‘fascist ideology’ of the RSS that ‘a small group of people are born superior to others... needs to be checked.’ He said: ‘There is the curtain of democracy that they use, and then go on with their business of killing individuals of dissenting opinion, or because they do not like them.’

Singh said the ‘pseudo institutions’ connected with the RSS, such as the Hindu Swayamsevak Sangh, the Bajrang Dal and the Hindu American Foundation ‘were a threat to our freedom’.

Citing the World Hindu Congress organized in Chicago in September, Singh said the spread of Hindutva was ‘not just India's problem any more... That is what gives me the shivers: these rightwing saffron terrorists [are] roaming in the free world, threatening our free institutions.’

He criticized the U.S. government for giving a visa to RSS chief Mohan Bhagwat, who, he said, ‘should be tried for crimes against humanity,’ and slammed Democratic Congressman Raja Krishnamurthy for speaking at the Hindu Congress. ‘These people are wearing facades, while they carry big knives to kill us, to kill the dissenting opinion, to kill anybody and everybody who will speak for equality, for justice and freedom for all.’

Sunita Viswanath, Co-founder of Sadhana: Coalition of Progressive Hindus, a New York-based nonprofit, said the ‘chilling repression of open debate and political expression’ in India and the violence against Muslims and Christians was alarming. ‘This repression and violence is taking place in the name of Hinduism, one that we do not recognize and cannot accept,’ she said.

Viswanath noted that the police had named the Sanatan Sanstha, an extremist right-wing Hindutva organization, for the September 2017 killing of Gauri Lankesh, a Bangalore-based activist and journalist. ‘The Sanatan Sanstha was also involved in the killing of other activists,’ she said. ‘Despite this, it has not yet been banned or classified as a terrorist organization.’

Vishavjit Singh, a cartoonist and performance artist from New York, and a survivor of the mass violence against Sikhs in the aftermath of Prime Minister Indira Gandhi's assassination in 1984, said that violence targeting Sikhs ‘set the stage for the powers to be - doesn't matter, BJP, Congress, anybody else - to know [that] you can kill with impunity, as many people as you like, in a democracy, and get away with it.’

photo: Dr. Katrina Lantos speaking at the Religious Freedom In India Briefing at the Capitol Hill