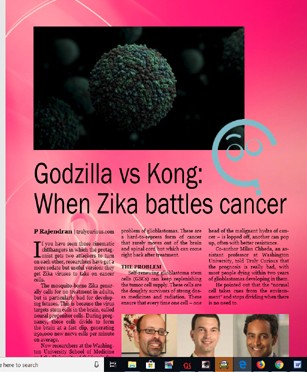 If you have seen those cinematic cliffhangers in which the protagonist gets two attackers to turn on each other, researchers have got a more sedate but useful version: they get Zika viruses to take on cancer cells.

The mosquito-borne Zika generally calls for no treatment in adults, but is particularly bad for developing fetuses. This is because the virus targets stem cells in the brain, called neural progenitor cells. During pregnancy, these cells divide to form the brain at a fast clip, generating 250,000 new nerve cells per minute on average.

Now researchers at the Washington University School of Medicine and the University of California San Diego School of Medicine had been working on the apparently unrelated problem of glioblastomas. These are a hard-to-repress form of cancer that rarely moves out of the brain and spinal cord but which can come right back after treatment.

Self-renewing glioblastoma stem cells (GSCs) can keep replenishing the tumor cell supply. These cells are the doughty survivors of strong doses medicines and radiation. These ensure that every time one cell – one head of the malignant hydra of cancer – is lopped off, another can pop up, often with better resistance.

Co-author Milan Chheda, an assistant professor at Washington University, told Truly Curious that the prognosis is really bad, with most people dying within two years of glioblastomas developing in them.

He pointed out that the “normal cell takes cues from the environment” and stops dividing when there is no need to.

“Cancer cells lose the ability to respond,” Chheda said, adding that even though medicine worked, all it took was for a few resistant stem cells to keep the problem growing.

“It was a long-standing question: How to get rid of cells resistant to the drug,” he said.
Co-author Michael Diamond had already been working on Zika, which, despite its recent fame, was first discovered in 1947 in a rhesus monkey and then in the Aedes africanus mosquito, both from the Ziika forest of Uganda, thus providing a connection between the two.

West Nile virus, from the same flavivirus family as the Zika virus, had been recruited in the 1950s to battle tumors. But once it was clear that West Nile indiscriminately targeted all neural cells besides some other cells, it was wisely discarded as a cure for cancer.

(Trivia: Flaviviruses members include many tick- and mosquito-borne diseases, including Japanese encephalitis, Kyasanur Forest disease, dengue and yellow fever. In fact, it was a survey for yellow fever that led to the discovery of Zika.)

Senior researchers Michael Diamond, Jeremy Rich and Milan Chheda
According to Chheda, it was Zhe Zhu, a postdoctoral researcher, who pursued the breakthrough idea to “use something natural to target stem cells,” Chheda said. Zhu, who works at the lab of Jeremy Rich, another co-author of the study and a UCSD professor, is the first author of the paper.

“I think all of us were slightly skeptical,” Chheda said. “I thought it might lead to non-specific killing.”
The question was if the GSCs and neural progenitor cells found in the developing brain were similar enough for Zika to target both.
Though it seemed a stretch, Zhu’s argument made some sense. After all, Zika seems particularly quick to target neural stem and progenitor cells. So the team tested variants of the virus (Brazil and Dakar) in human-derived glioblastoma cells, and in mice.

The team found that in humans Zika targeted 60 percent of the GSCs, particularly those producing a protein called SOX2, which helps ensure stem cells can renew and differentiate. Zika was minimally effective once the GSCs had already differentiated into other types of glioma cells (DGCs). Zika left normal brain cells alone but were inefficient in killing proliferating tumor cells. How do the researchers know that? Well, because they found high levels of Ki-67, a protein seen on all cell surfaces but only during division.
They treated fresh human tumor specimens and fresh specimens from epilepsy surgery. After a week of being infused with Zika-Dakar, the results were gratifying. The virus damped the growth rate of GSCs but not other brain cells.
Zika cannot really infect mice, and so the modified version that could, mouse-adapted Zika-Dakar, was first tested on mouse glioma cells and other brain cells, and then in live mice with tumors.

The live mice with tumors treated with mouse-adapted Zika-Dakar had smaller tumors and 2-3 times longer lives than those that just got saline.
As Chheda put it, “GSCs are weaker because they don’t mount an immune defense against Zika.”

Looking beneath the hood

Brain cancer stem cells (left) are killed by Zika virus infection (image at right shows cells after Zika treatment). The new study shows that the virus, known for killing cells in the brains of developing fetuses, could be redirected to destroy the kind of brain cancer cells most likely to be resistant to other treatment. Photo: Zhe Zhu

True, Zika does appear to work against GSCs but nobody knew how – beyond the fact that it somehow suppresses antitumor immune responses.

To make things a wee bit clearer, the researchers treated another set of human tumor cells with Zika-Dakar. Then 36-48 hours later they checked the levels of RNA – the material that carries information from relevant parts of the DNA, and strings together corresponding proteins. They found that RNA for proteins involved in immunity were affected differently in GSCs from the already differentiated tumor cells. Zika stimulated a higher immune response in GSCs than the differentiated cells.

The team thought this could be because interferon – proteins produced when cells come up against foreign material or cancer – stimulated genes in surrounding cells to mount a fierce immune response. But because Zika-Dakar sparked a bigger response in GSCs than in differentiated glioma cells, the immune system perhaps saw GSCs as a bigger enemy and destroys them more effectively.

Just to be sure, the team used an antibody to block systems on the surface of DGCs that interferons switch on. Once the protective mechanisms were gummed up, the DGCs were as prone to be infected with Zika-Dakar as GSCs.
The team looks forward to the use of combination therapy, with chemotherapy wiping out the tumor cells, and Zika mopping up lingering GSCs that could spur a relapse of the disease.

There are some risks to the use of Zika. In the paper, the researchers express some worry about a modified version of the virus deemed safer because it more susceptible to immune responses due to two changes in its DNA. That altered virus still has an improbable – but not impossible – chance of reverting back to standard Zika.

Researchers at the University of Georgia have pointed out that Zika infections also result in abnormal blood vessel formation and a leaky blood brain barrier, leaving the brain more vulnerable to infections.

Besides, Joseph Gleeson, also from UCSD, had come up last year with research suggesting that Zika may not be all that benign for adults, especially those with compromised immune systems.

Thing is, post-childhood, adult brains still maintain a small repository of stem cells – in the small cavities in the brain, and in the seahorse-shaped hippocampus. The hippocampus, among other things, is important for spatial learning and temporary memory storage (somewhat analogous to the RAM in a computer).

Gleeson, who did not respond to Truly Curious requests for comment, had stated then that in some cases Zika could affect long-term memory or depression.
Taking the more recent study forward calls for a careful weighing of the pros and cons – the probability of dying of cancer now against debilitating long-term problems.
For now, the team can take refuge in the positives.
As Chheda put it, “The study shows a collaboration – how three labs with different expertise can come together and apply something from a health epidemic to cancer.”

The team’s research appeared in the Journal of Experimental Medicine.