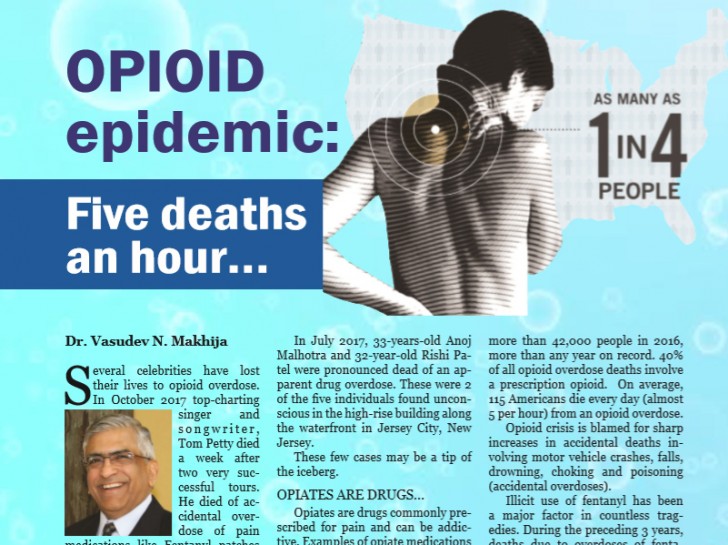 (From India Life and Times Magazine

http://www.indialife.us/getPDFNews.php?pdf=108722_Opioid%20epidemic...pdf
Several celebrities have lost their lives to opioid overdose. In October 2017 top-charting singer and songwriter, Tom Petty died a week after two very successful tours. He died of accidental overdose of pain medications like Fentanyl patches prescribed for severe pain, while on several other medications.

Vice chair of the Joint Chiefs of Staff, retired admiral James Winnefeld, Jr. said in an article in The Atlantic, No Family Is Safe From This Epidemic, “As an admiral I helped run the most powerful military on Earth, but I couldn't save my son from the scourge of opioid addiction.”


South Asians are not immune from the wrath of this epidemic. Last month, 51-year-old Dr Ravindra Rajmane, a well-liked and respected pulmonologist at NYU Langone Medical Center, was found dead in his Park Avenue apartment in New York City from a suspected overdose of heroin.
In July 2017, 33-years-old Anoj Malhotra and 32-year-old Rishi Patel were pronounced dead of an apparent drug overdose. These were 2 of the five individuals found unconscious in the high-rise building along the waterfront in Jersey City, New Jersey.
These few cases may be a tip of the iceberg.

Opiates are drugs commonly prescribed for pain and can be addictive. Examples of opiate medications are oxycodone (Percocet, Oxycontin and other brands), hydrocodone (Vicodin, Lorcet etc), morphine, codeine, fentanyl, methadone and others. Heroin is an illicit synthetic opioid drug, which can be used by snorting or intravenously.

Dependence on opioids, like on other drugs and alcohol, adversely impacts careers, families, finances and education. Many drop out of college shattering their own dreams and those of their parents.

Illicit use of fentanyl has been a major factor in countless tragedies. During the preceding 3 years, deaths due to overdoses of fentanyl jumped from 3000 to 20000 in 2016 – a staggering 540 per cent increase. Prescription fentanyl is a synthetic opioid pain reliever, approved for treating severe pain, typically advanced cancer pain. It is 50 times more potent than heroin and up to 100 times more potent than morphine. Most recent cases of fentanyl-related harm, overdose, and death in the U.S. are linked to illegally made fentanyl. It is sold through illegal drug markets for its heroin-like effect. Because it is relatively cheaper, it is often mixed with heroin and cocaine as a combination product—with or without the user’s knowledge—to increase its euphoric effects. There are reports that it is also mixed with pills, which may look like other familiar drugs for pain and anxiety. Unsuspecting heroin and other drug users use their usual amount of the drug but when it is laced with fentanyl it makes it more potent with disastrous consequences of overdose.

A few years ago, physicians were penalized for not prescribing opiates for adequate pain control in their patients. Then the pendulum swung and physicians started over-prescribing opiate pain medications. Although this may be a simplistic assessment it may have played a role in the epidemic. Marketing by pharmaceutical companies of opiate medications could have contributed to over-prescribing of these medications. Recently lawsuits have been filed against several companies involved in making, distributing and selling prescription painkillers accusing them of helping fuel the national opioid epidemic.

Call 911 immediately if a person exhibits any of these symptoms:
• Their face is extremely pale and/or feels clammy to the touch
• Their body goes limp
• Their fingernails or lips have a purple or blue color
• They start vomiting or making gurgling noises
• They cannot be awakened or are unable to speak
• Their breathing or heartbeat slows or stops
If you or someone you know has problems with opioid addiction you should familiarize yourself with the use of potentially life-saving naloxone.

People don't plan to get addicted to drugs. They often begin using the drugs for one reason or another e.g. to control pain. They believe they can control how much and often they will use the drug. But once addiction develops, it takes a life of its own. Addiction works away at the brain covertly. It changes how the brain works and these changes last a long time. There are changes in person’s behavior and moods. They have difficulty concentrating and making decisions. The urge to get and use the drug becomes an obsession at the expense of everything else in their life – family, career, and so on. There is also some genetic risk of drug addiction.

Addiction is an illness like heart disease. Addiction is not just a weakness of character or lack of will power. It does not mean the person is bad even though the addiction results in behaviors that are considered bad e.g. lying or stealing. Addiction can affect anyone – any race, socioeconomic and educational background.
People like to feel good. They want more of what makes them feel good e.g. good food or desert. Drugs excite the parts of the brain that makes them feel good. But, in time the feel-good parts of the brain get used to the drug. The drug fails to cause the good feeling unless more of it is used. Soon drug is needed to just feel normal. When drug is not taken they feel sick from the withdrawal symptoms.

Some of the risk factors for addiction are difficulties at home, work, and in relationships. Drugs may be used to escape thinking of the problems. Those with mental problems like anxiety, depression, attention deficit disorder, etc. may use drugs to make them feel better. When drug use begins at young age it increases the chance to develop addiction during adulthood. Families and friends who use drugs may also influence some into using drugs.

Although it is very hard to overcome addiction, there are effective treatments available. Support groups, counseling, treatment programs and medicines can help.

South Asians in this country are often under the illusion that this crisis does not affect them. Not true. Although we do not have the data on exact numbers in terms of prevalence of opiate abuse in this community, we hear of cases. If it is not public information, it goes unnoticed by the community. In my experience as a practicing psychiatrist and through my work with the non-profit organization SAMHIN (www.samhin.org), I have come across numerous cases of opiate dependence that is likely not part of the national statistics or public information. It is my observation that South Asian individuals abusing opiates and their families tend to “hide” their addictions more often.

Here are some steps you can take to minimize your risk:
• Talk to your doctor to discuss alternatives to prescription opioids to manage your pain. Some alternate options may actually work better.
• Never take opioids in greater amounts or more often than prescribed.
• Never sell or share prescription opioids.
• Store prescription opioids in a secure place, out of reach of others.
• If you have unused prescription opioids at the end of your treatment, find your community drug take-back program or your pharmacy mail-back program, or flush them down the toilet.
• Don’t take opioids with alcohol.
• Discuss with your doctor if you can safely take any other medications while on opioid medications.
• If you or someone you know is addicted to opioids (prescribed or illicit), speak to your doctor about naloxone in the event of emergencies of opioid overdose. If that occurs you should also call 911 for assistance. It might help to save a life.
• Don’t drive while on opioid medications.