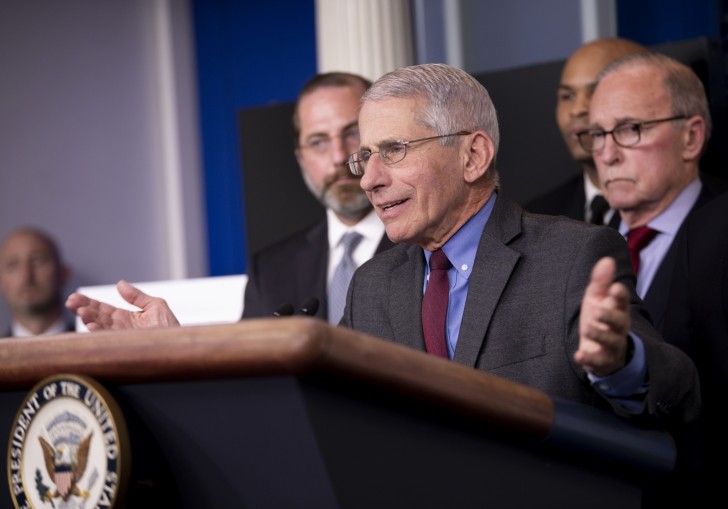 New York, July 3
America's top infectious diseases expert Anthony Fauci tore into the lack of a unified, national response to the coronavirus and warned that a "devil may care" interpretation in wide swathes of America to the re-opening effort is working to the country's "detriment".

Speaking at an online Harvard Business Review event Thursday afternoon, Fauci repeated his hope today for a "safe and effective" vaccine by the end of 2020 or by the first quarter of next year. That timeframe, Fauci said, "would be a success".

Early preliminary data on "several" vaccine candidates are pointing to predictable immune response, Fauci said. "They can induce the kind of response we can predict to be protective"

Explaining his view of "success", Fauci said America would "gladly accept" a vaccine where the person who gets the shot gets exposed, maybe infected but doesn't get sick enough to need medical attention.

Responding to questions on a second wave, a visibly concerned Fauci said America is still in its first wave of the coronavirus outbreak.

"We are still in the first wave. Take a look at the curve. It went up, flattened out and now going right back up."

Infections per day in the US have soared to an all-time high of 50,700, more than doubling over the past month, according to Johns Hopkins University.

Fauci has warned in the past week that 100,000 cases per day won't be a surprise if things continue in the current trajectory. Much of the sunbelt is now rolling back reopening plans in response to the latest surge in caseload, the highest the US has seen since the domestic outbreak began in January.

Fauci's comments come 24 hours after US president Donald Trump shifted his stance on masks, saying he likes them because it makes him look like the Lone Ranger and would wear one if he were in a "tight situation".

Trump has long resisted being photographed in a mask although recommendations to mask up came in early April, via the Centers for Disease Control and Prevention (CDC). Trump's U-turn comes after the virus has roared into Republican strongholds with 75 per cent of new infections coming from states Trump won in 2016.

Asked about how he navigates White House politics, Fauci said his method hasn't changed since he first stepped into the White House back in the 80s.

"I'm going to tell the truth and a lot of times, that's going to be something that person doesn't want to hear. So you've got to be aware of the fact that that person might not ask you back. And what happens if you do that, what happens is that people know that you're not being partisan one way or the other, you just tell the truth. People respect you and they do ask you back."

The US leads the world's coronavirus caseload, with more than 2.7 million people sick and more than 128,000 dead since the first virus-linked fatality in early February this year.

Public health experts continue wringing their hands at the lack of national guidance on preventive measures as zig zag messaging and wild summer parties have sparked an alarming resurgence of COVID-19 in nearly half of the 50 states.