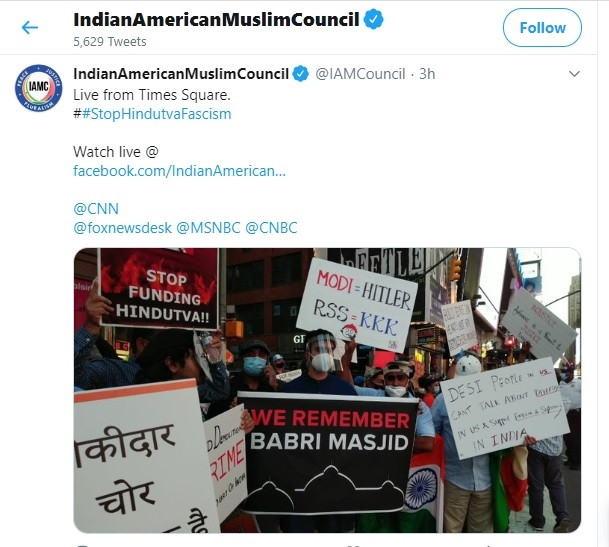 New York, Aug 6
Twitter has censored a video showing a display of Lord Ram and the temple being built in Ayodhya as "potentially sensitive content", while allowing without any caution a photo from a protest against Hindu shrine by an Islamic group with offensive slogans.

Jagdish Sewhani, the chairman of the Ram Janma Bhoomi Shilanyas Celebrations Committee of USA tweeted a nine-second video of a display in New York's Times Square.


"I was so proud to see our Ram Mandir and Ramji in Times Square today. Let's celebrate this once in a lifetime event tonight at 7.30 p.m.," he said in a following tweet.

The video display on Times Square had been turned off after being shown for a few hours on Wednesday morning following protests from Islamic groups and others.

However, Twitter allowed without any cautionary statement a tweet from the Indian American Muslim Council showing their protest in Times Square on Wednesday even though the image in it contained offensive words.

The counter protest was against a celebration held in Times Square for the laying of the foundation stone for the temple in Ayodhya at the site where Lord Ram is said to have been born.

Twitter has been accused of following ideological double standards favouring the liberals and the left, while censoring those on the right.

Twitter CEO Jack Dorsey had himself posed with a poster with the incendiary communal message, "Smash Brahminical patriarchy", while on a visit to India in 2018.

An influential Republican member of the House of Representatives, Jim Jordan had said recently that "no matter how you spin it, there seems to be different rules for conservatives and liberals on the (Twitter) platform".