Pooja Bhatt concerned about people who are 'too battered and broken' 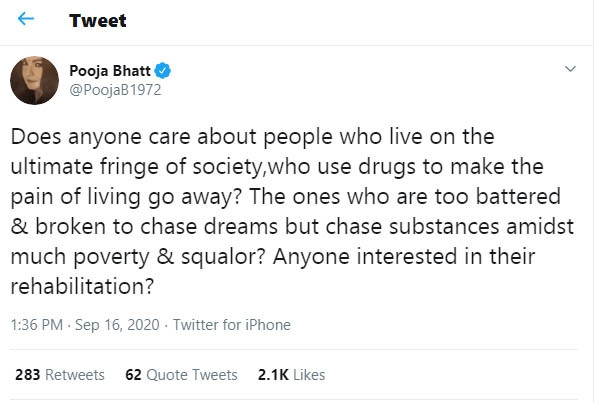 Mumbai, Sep 16
With Bollywood facing allegations of being a drug hub, actress-director Pooja Bhatt has asked if anyone cares about people in the fringes of society who need rehabilitation.

Taking to Twitter on Wednesday, she wrote: "Does anyone care about people who live on the ultimate fringe of society, who use drugs to make the pain of living go away? The ones who are too battered and broken to chase dreams but chase substances amidst much poverty and squalor? Anyone interested in their rehabilitation?"

This comes amidst reports of Shruti Modi being summoned on Tuesday by the Narcotics Control Bureau (NCB).

The questioning of Shruti Modi is part of the NCB investigation in the wake of a case registered at the request of the Enforcement Directorate.

The NCB has till date arrested over one and a half dozen people including Sushant Singh Rajput's girlfriend, actress Rhea Chakraborty, her brother Showik, Sushant's house manager Samuel Miranda and several others, as part of investigation into the late actor's death.

Sushant was found hanging in his Bandra house on June 14.