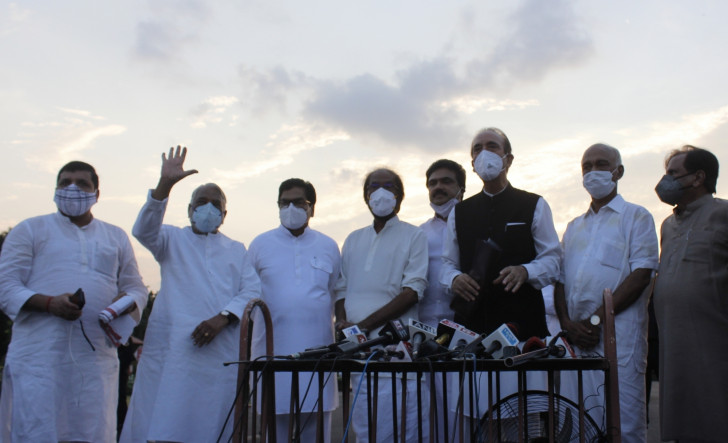 New Delhi, Sep 23 Opposition leaders met President Kovind on Wednesday and apprised him of the circumstances amid which the Farm Bills were passed in the Rajya Sabha on Sunday. They requested him to return the Bills for reconsideration to the House.

After the meeting Leader of Opposition Ghulam Nabi Azad said, "the government did not have the numbers and our request for division was ignored and even the resolution against the Bill was not allowed."


The opposition said that the government ignored the demand for sending the Bills to a select committee.

Ahead of this meeting, the Congress and other opposition parties continued to protest in the Parliament complex here on Wednesday.

The protesting lawmakers marched from Gandhi's statue in the complex to BR Ambedkar's statue within the premises to register their protest while carrying placards.

Congress leader Jairam Ramesh tweeted: "All MPs of the Congress and like-minded parties are marching from the Gandhi statue to the Ambedkar statue in Parliament to protest against anti-farmers and anti-workers Bills rubber stamped in Parliament in the most undemocratic manner by the Modi government."

Earlier, the opposition leaders met in the chamber of Leader of Opposition Ghulam Nabi Azad and decided to continue their protest over the Farm Bills.

The opposition and the government are at loggerheads ever since the two farm Bills were passed amid a ruckus in the Upper House on Sunday. The third contentious Bill on essential commodities was passed by the Rajya Sabha on Tuesday.

On Sunday, pandemonium broke out in the Upper House as the opposition protested over the two Farm Bills. Trinamool MP Derek O'Brien even approached the Chair and tried to snatch a mike while citing the rule book.