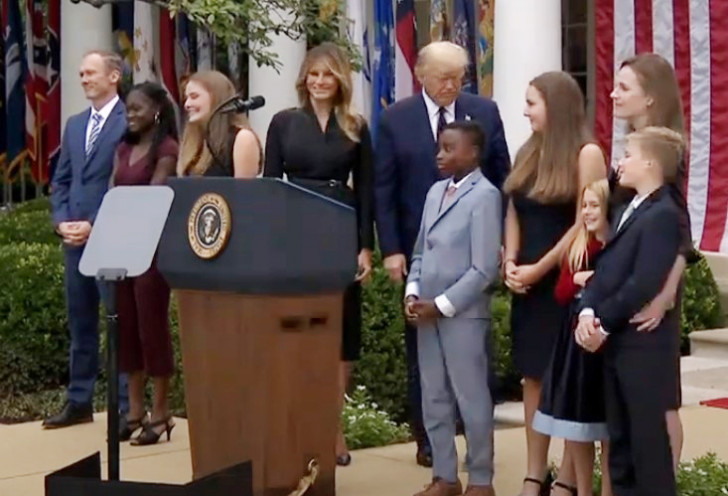 Photo: Judge Amy Coney Barrett, at right, who has been nominated to the United States Supreme Court by President Donald Trump, with her family at the announcement of her nomination at the White House. Her husband, Jess, is at left, and First Lady Melania Trump is next to Trump. Two

of the children, who are adopted, are of African descent. (Photo: White House/IANS)
New York, Sep 27
United States President Donald Trump has nominated conservative Judge Amy Coney Barrett to the supreme court to take the place of the liberal Justice Ruth Bader Ginsberg and tilt its ideological balance to the right ahead of the elections.

With 38 days left for the election and bitter fight looming in the Senate that must approve her appointment, Trump announced her nomination on Saturday calling her "a woman of unparalleled achievement, towering intellect, sterling credentials and unyielding loyalty to the Constitution".

Accepting the nomination in the company of her seven children, two them of African descent from Haiti, Barrett said she would strictly adhere to the written constitution.

"A judge must apply the law as written. Judges are not policymakers, and they must be resolute in setting aside any policy views they may hold," she said.

Barrett was a law professor before Trump appointed her a judge of the court of appeals based in Chicago with jurisdiction over three states.

The Senate is likely to approve her appointment to the nation's highest court because the Republicans have a slim majority and a key party senator, Mitt Romney, who has opposed Trump on many issues has said that he would back bringing her nomination to the senate even though it is close to the elections.

Democrats have opposed Trump appointing a justice so close to the election and cite the refusal of the Republicans to allow a nominee of Trump's predecessor, Barack Obama, even getting a Senate consideration in his final year.

They say that Ginsburg dying wish was that the next president should nominate her successor. Trump has questioned it.

Democratic vice-presidential nominee Kamala Harris, who is a member of the Senate and must vote on the nomination in the middle of her campaign, tweeted within minutes of Trump's announcement, "I strongly oppose Judge Barrett's nomination."

Senate Majority Leader Mitch McConnell, a Republican, has now reversed his 2016 stance and is now pushing ahead with the nomination.

One of the reasons for the concern over Barrett's nomination is that the court may have to decide on the results of the upcoming election as it did in 2000 in the electoral dispute between Democrat Al Gore and Republican George W. Bush, handing a decision that favoured Bush.

Democrats also fear that the current ideological balance of the court which had four liberals and five conservatives - although some crossed ideological lines in some cases - would now move firmly conservative giving that side a six-member edge.

Supreme court justices are appointed for life and Barrett could have a long stint as she is only 48.

Several key issues like abortion, the right to have guns, health care and immigration could be decided by the supreme court.

Harris said in her tweet, "Trump's hand-picked successor to Justice Ginsburg's seat makes it clear: they intend to destroy the Affordable (health) Care Act & overturn Roe (legalising abortion). This selection would move the court further right for a generation & harm millions of Americans."

Barrett is opposed by many women's groups because they fear that she may overturn the judgment that legalised abortion around the country and the Democrats are hoping that this prospect would lead to an upsurge of women's support for the party's presidential candidate Joe Biden.

Addressing the ideological lines in the court, Romney said, "I recognize that we may have a court which has more of a conservative bent than it's had over the last few decades. But my liberal friends have over many decades gotten very used to the idea of having a liberal court."

Barett's appointment will also roil the communal politics of the US.

Barrett is a devout Catholic and if confirmed, she will be joining a nine-member bench on which five judges are Catholic and two are Jewish. The majority of Americans are Protestant Christians, but the only justice who is Protestant, Neil Gorsuch, was raised Catholic before beginning to attend an Episcopalian church.

What concerns Democrats is that as a devout Catholic she may oppose abortion rights in keeping with her religion.

During the senate hearings for her confirmation as an appeals court judge, Senator Diane Feinstein remarked in a reference to Barrett's religion, "The dogma lives loudly within you."

Biden is a Catholic, but supports abortion rights, and Trump is counting on Barrett to increase his support among Catholics and balance out Biden's religious base.

Barrett also conforms to Trump's anti-elitist populism, as she will be the only justice on the supreme court without an Ivy League degree if she is confirmed.