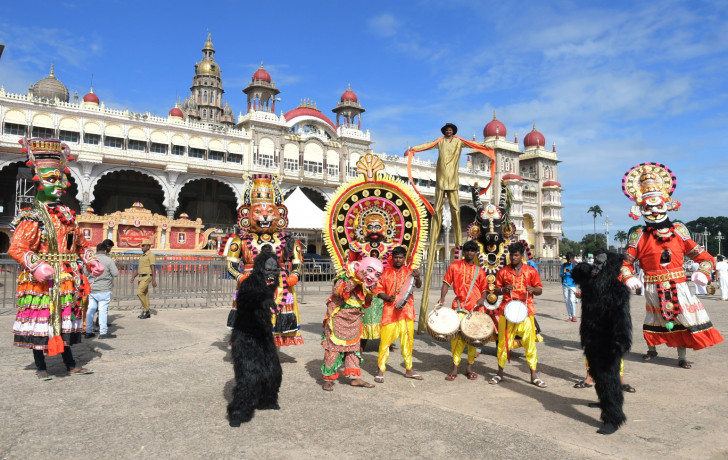 Mysuru, Oct 25
The world-famous victory procession of caparisoned elephants (jamboo savari) to mark triumph of good over evil would be held in the royal Amba Vilas palace arena on Monday on the 10th day of the Dasara festival under the Covid-induced guidelines, an official said on Sunday.

"The 410th year Dasara finale on Vijayadashmi will be simple and subdued due to state restrictions to contain the virus spread, with the victory parade in the palace grounds without pomp and grandeur," an official told IANS here.

The city of palaces and cultural capital of Karnataka is about 150km west of Bengaluru in the southern state.

Chief Minister B.S. Yediyurappa will conduct the ritual at the Nandi Dwaja near the Balarama gate of the palace at the auspicious time (makara lagna) between 2:59-3:20pm and make floral offerings to the Hindu goddess Chamundeshwari idol replica astride the caparisoned elephant Abhimanyu during Kumbha lagna between 3:40-4:15 pm, as per the Hindu calendar.

As per tradition, the scion will conduct Banni puja on Monday and conclude the Dasara rituals.

The replica of the goddess will be placed in the 750kg golden chariot (howdah) astride Abhimanyu, and will be flanked by Kumki elephants Vijaya and Kaveri, with Vikrama and Gopi as 'Nishane' and 'Naufat' pachyderms behind.

In normal times, the victory procession is staged from the palace in the city centre to Bannimantap grounds through the 5km route for the torchlight parade in the night as a culmination of the grand finale, watched by lakhs of people, including visitors and tourists from across the country and overseas.

The royal Wodiyar family, including tutular head Yaduveer Krishnadatta Chamaraja, queen mother Pramoda Devi, who adopted him as the scion, and princess Trishkiha Kumari will be among the 300 dignitaries who will witness the grand finale in the palace grounds.

As Mysuru registered second highest number (46,705) of positive cases after Bengaluru (3,25,773) in Karnataka, whose Covid-19 tally crossed 8 lakh on Saturday, the state-sponsored Dasara celebrations has been kept low-key to avoid large gathering and crowding in public places.

As a legacy of the Wodiyar dynasty since 1610 when its ruler Raja Wodiyar began, the Dasara festival is celebrated every year by the state government as Nada Habba (state festival).

"The finale will be telecast live in the local channels and streamed in the social media like Youtube and Facebook for the people to watch from their homes safely," said the official.

The 10-day fest began in the Chamundeshwari temple on October 17 atop the hill on the city's outskirts, with Bengaluru-based Jayadeva heart hospital director C.N. Manjunath inaugurating it in the presence of the Chief Minister and other dignitaries by invoking the deity for blessings.

Owing to the restrictions, traditional and cultural events during the 10-day fiesta like children's Dasara, women's Dasara, film festival, exhibition, food fest and folk dances and music and wrestling bouts were cancelled this time.