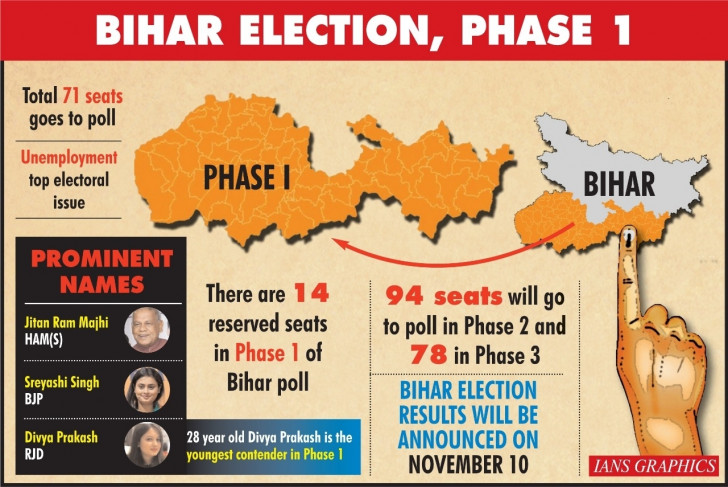 Patna, Oct 27
In Bihar, about 2.14 crore voters from 71 assembly constituencies will decide the political future of 1,066 candidates in the first phase of assembly elections on Wednesday.

In the first phase, the main contest is between the the National Democratic Alliance (NDA)led by the Bharatiya Janata Party (BJP) and the opposition parties, but in some areas, other political parties and independents are also trying to make the competition triangular.

Voters will exercise their franchise in the first phase for which 31,380 polling booths have been set up. Additional Chief Electoral Officer of the state Election Commission Sanjay Kumar Singh said that jawans of central paramilitary forces have been deployed at all the polling booths.

He said, 27 candidates are in the fray at Gaya, the most from any constituency, while the least number is at Barbigha, with just five candidates.

As per the guidelines of the Election Commission, polling will be held at all polling booths following social distancing norms.

One thousand voters will exercise their franchise at every polling booth.

Voters will have to go to the polls by covering their faces with a mask or a gamcha (towel). Their body temperature will be checked, their hands sanitised and then they will be allowed to vote after wearing gloves.

All political parties have put their weights behind attracting voters for this phase of polling. Prime Minister Narendra Modi, BJP president J.P. Nadda, Chief minister Nitish Kumar and a dozen union ministers appealed to the people to vote in favour of the NDA.

In Bihar, elections are being held in three phases for 243 assembly seats. The first phase will be held on October 28 on 71 seats.