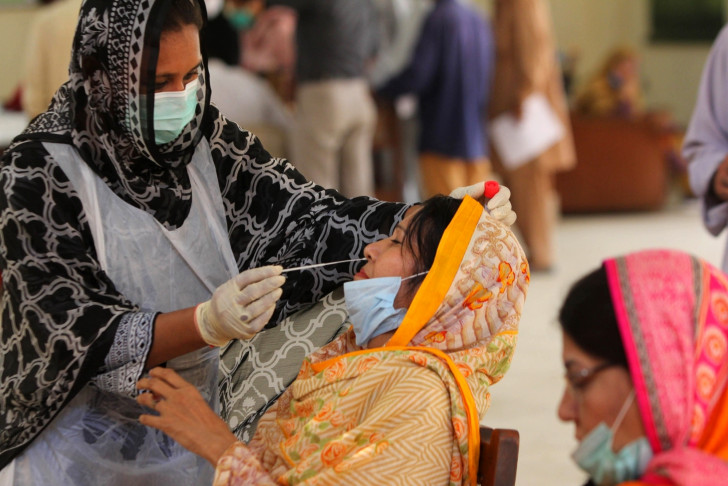 Islamabad, Nov 19
New coronavirus cases have started to surge again in Pakistan amid a second wave of pandemic, prompting the government to impose smart lockdowns in hotspots and ban all public gatherings across the country.


The Pakistan occupied Kashmir (PoK) government has also notified the return of a lockdown from next week, shutting down schools, wedding halls and beauty parlours, while the Punjab province has also extended smart lockdown in several coronavirus hotspots.

Over 2,000 cases have been reported this week, raising serious concerns over the second wave.

Health experts have described the second wave of the virus as "deadly contagious".

The PoK government has issued a notification regarding the lockdown, to be imposed from November 22 to December 6, putting a complete ban on public gatherings.

"All political, religious and social gatherings will be banned during the lockdown. However, prayers inside the mosques would be allowed subject to strict adherence to the anti-Covid standard operating procedures (SOPs). Funeral prayers will be restricted to 50 people.

"All public and private sector educational institutions, including religious schools, wedding halls, shopping malls, barber shops, beauty parlors and private clinics will be closed. Dine-in facility in restaurants will also not be allowed but the take-away service will be permitted," the notification.

It further said that government and semi-government offices will have only 50 per cent of staff attendance, while a complete ban on visitors will be imposed.

"Any violation of the rule would invoke a fine of 500 PKR," the notification said.

Adding more into the details and specifications, the notification stated that "groceries, medical stores, bakeries, vegetables and fruit shops, dairy shops, ovens would be open from 7 a.m. to 7 p.m. Public transport will run under the SOPs and tourists' movement will also be restricted in the region during the lockdown period".

Meanwhile, the Punjab government has also imposed a smart lockdown in more than nine cities.

The cities whose hotspot areas have been sealed include Bakhar, Rawalpindi, Bahawalpur and Multan.

"Free movement of the citizens had been restricted in these affected areas," a notification of the Punjab provincial government said.

The fresh notifications came after Pakistan's National Command and Operation Centre (NCOC) revealed that active cases of coronavirus in the country had crossed 30,000.