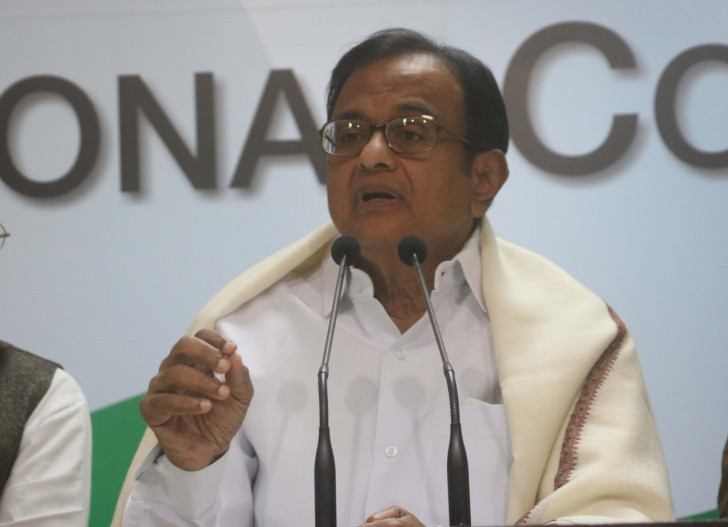 New Delhi, Nov 20 After voicing concern over the poor performance of the Congress in the Bihar polls and bypolls in other states, Congress leader P Chidambaram said that the opposition Mahagathbandhan (Grand Alliance) lost by a whisker in Bihar. His statement comes in the wake of the internal rift in the party coming out in the open.

Chidambaram said, "As I have pointed out the Grand Alliance lost to the NDA by a whisker of 0.03 per cent.The elections turned on 8 seats. If the Alliance had won 8 more seats, the result would have been 118 to 117 (instead of 110 to 125). Significantly, the HAM and VIP won 8 seats."

Earlier, Chidambaram had raised concerns over the party's deteriorating situation on the ground and pointed out its weak organisational structure. He had said that the party should have chosen winning seats only in the seat-sharing, albeit lesser in number.

But on Friday Chidambaram said the NDA is on decline compared to the Lok Sabha polls of 2019." Even after the Bihar Assembly elections, the decline in BJP's performance after 2019 Lok Sabha elections is visible and significant. Of the 464 Assembly segments that the BJP contested both in 2019 and in subsequent Assembly polls and bypolls, the BJP has won only 218 segments, on the contrary, in 2019 the BJP had won 392 segments," he said.

The Congress is facing an internal crisis with many leaders coming out in the open and criticising the leadership. Party leaders claimed that support for the "revival" has swelled up to more than 50, as the chorus for immediate reforms has fired the imagination of all those who want what's best for the Congress.

Sources say that Bihar in-charge Shaktisinh Gohil and Gujarat in-charge Rajeev Satav offered to quit, however, they were told to hold on till Sonia Gandhi took stock of the situation.

After senior leader Kapil Sibal raised concerns over electoral defeats and criticised the leadership many leaders have come to the defence of the leadership including the Chief Ministers of Rajasthan and Chhattisgarh who slammed Sibal for going public.

The party leaders are miffed with the way the Bihar polls and states bypolls were handled by the party and recent defeats in the bypolls widened the chasm in the grand old party.

The dissenting leaders want fresh organizational elections from block to the Congress Working Committee level to rejuvenate the cadres. The party's central election authority (CEA) has met twice to set the ball rolling for elections, and has sought the list of the AICC members but the G23 wants that process of AICC members elections should be done first as the old system of nomination should be done away with, and the election of the party president should be done only after new AICC members are elected.

The group is pushing for elections in the CWC, and revival of the parliamentary board in the party which is defunct.

Kapil Sibal had said that there is no forum to raise concerns so he is going public.

The party has not deliberated on the Bihar results as the Congress was found to be the weakest link in the Grand Alliance and missed the Bihar bus.

The Congress leaders are miffed with the inept handling of issues by Team Rahul Gandhi who are calling the shots without any accountability and giving key assignments to inexperienced people who could not take on the BJP in any situation.