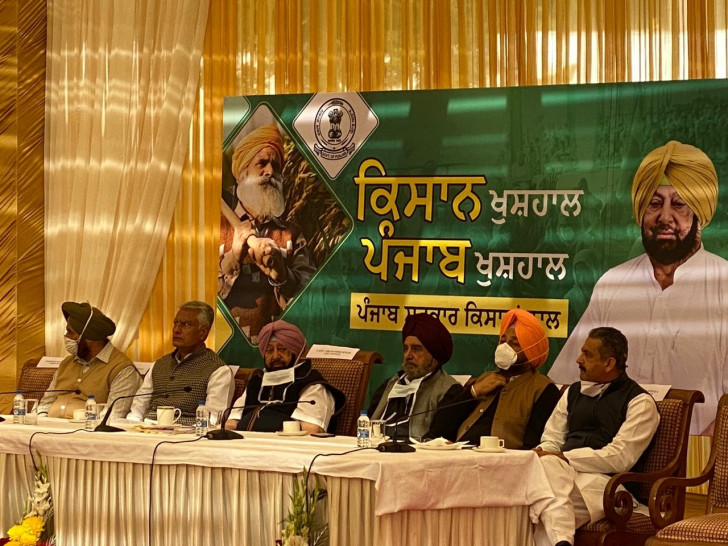 Chandigarh, Nov 21 Punjab Chief Minister Amarinder Singh on Saturday succeeded in breaking the imbroglio over the suspension of train services in the state, with the farmer unions acceding to his appeal and announcing complete lifting of the rail blockade from November 23 to pave the way for resumption of both goods and passenger train services after two months.

Soon after the announcement, the Chief Minister urged the Central government to reciprocate by restoring all train services in the state, and also to hold further talks with the farmer representatives to resolve the crisis over the farm laws.

The decision to lift the rail blockade was announced by Bharti Kissan Union (Rajewal) President Balbir Singh Rajewal at a meeting of representatives of the Kisan Unions with the Chief Minister here to resolve the imbroglio over the rail blockade imposed by the farmers in protest against the Centre's laws.

Rajewal, however, warned of resumption of blockade if the Central government fails to hold talks with the farmers' representatives in the next 15 days to address their concerns on the agricultural laws.

The farmer leaders urged all political parties in Punjab to get together to support them in their fight against the Central agricultural legislations instead of politicizing the issue, which was of grave concern to the state.

Thanking the farmer unions for accepting his request, the Chief Minister assured the farmer leaders that he would meet the Prime Minister and the Union Home Minister soon to press for their demands.

"Let us together put pressure on the Centre to see our point of view and understand how these (central farm) laws would ruin Punjab," he said, asserting that he was with the farmers in their fight.

"We all have farmer blood in our veins," he quipped.

Amarinder Singh also promised the farmer representatives that he will look into their other demands, including those relating to sugarcane price hike and clearance of dues, as well as withdrawal of first information reports registered in stubble burning cases.

He said he would hold talks with them on these issues within the next one week, and will also set up a committee of officers to discuss the matter.

Welcoming the farmer organisations' decision to lift their rail blockade, State Congress president Sunil Jakhar exhorted all parties to work together in the interest of the farmers and the state.

In his appeal earlier, the Chief Minister said his government would not interfere in their peaceful agitation, which was their democratic right and which had forced the Centre to rethink on its stand on the farm laws.

Terming the fight against the central legislations a partnership between the state government and the farmers, he said, "We have to protect Punjab's interests together."

However, he pointed out that if the rail services are not restored the state will continue to face immense problems and it was in the interest of Punjab that the trains should start operating at the earliest.

The Farmers' Produce Trade and Commerce (Promotion and Facilitation) Act, the Farmers (Empowerment and Protection) Agreement of Price Assurance and Farm Services Act and the Essential Commodities (Amendment) Act were enacted in September.

Farmers protesting against the laws have expressed apprehension that these laws would pave the way for the dismantling of the minimum support price system, leaving them at the 'mercy' of big corporate entities.