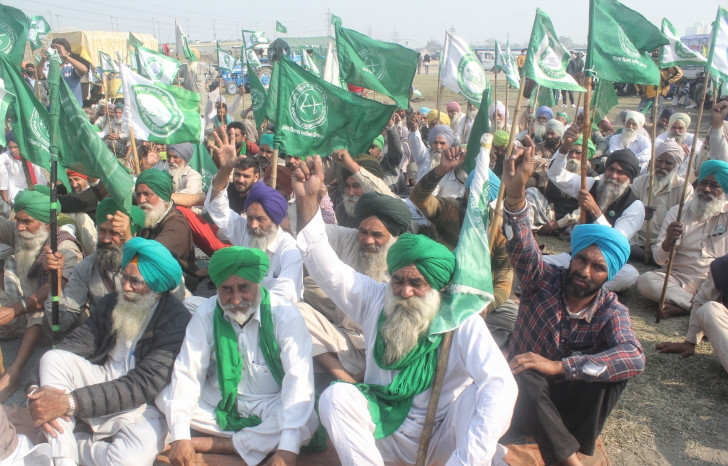 Sonipat (Haryana), Dec 1: Stubble is now literally providing warmth without burning to thousands of protesting farmers of Punjab and Haryana, who have been spending chilly nights for the past six days after travelling hundreds of miles to mark their planned protest at the borders of the national capital against new farm laws.

This is one use of stubble that none of the agricultural and climate experts looking into the blazing issue of its burning ever thought of.

Blamed for polluting Delhi air every year with the onset of winter, the stubble is now being used for keeping themselves warm.

Beddings in every tractor-trailer have layers of the stubble spread on the bottom.

"We have been making use of 'parali' (paddy straw) in our households for decades as it is a good insulator," remarked Ajaib Singh, who farms a small plot of land in Punjab's Ferozepur district, while pointing towards a neatly piled up straw.

He said even the stubble could be used to get protection from the cold and the hot floor.

Currently, thousands of farmers are camping at Singhu and Tikri borders, both on the Haryana side, after rejecting Centre's offer to move to Burari in Delhi.

Every year the problem of pollution caused by burning of straws in the agricultural states of Punjab and Haryana is so severe that satellite images show fires across millions of hectares.

Another farmer Nachattar Singh, 75, said: "Even we are using stubble in day-to-day activities in our homes and at religious places in the village. Each farmer is storing a small portion of the straw after the paddy harvesting for its personal use during the winter."

His wife Jagir Kaur said earlier it was used for constructing houses. "Now villagers are constructing concrete structures. In the mud structures, the use of the straw was optimum."

She said the straw is now a huge problem for them because of mechanised agriculture.

A combine harvester leaves a significant length of straw on the field. The standing crop residues of rice are burnt for wheat sowing, Kaur, a septuagenarian farmer from Dhudike village in Moga district, explained.

She added with the increasing labour cost the farmers prefer setting fire to their paddy fields after the harvesting.

Farmers at the camping sites of Singhu and Tikri blame their respective state governments for lack of arrangement for ex-situ management of the stubble.

"There are fewer options for ex-situ management of paddy stubble. Even the government has not been successful in managing stubble by way of in-situ management. This resulted in huge stubble going to the flames," Jai Bhagwan Goyal, a farmer from Haryana's Karnal district, told IANS.

He said the government should invest hugely to make its optimum in terms of manure and raw material for various industries.

Even the protesting farmers have taken the cheapest route by converting their trailers into cosy 'bedrooms' by using the agro-waste.

Sixty-year-old Dalbir Kaur, another protester from Punjab where more than 70 per cent of the population depends on agriculture, said for the last six days they were sleeping in a trailer.

"We have stuffed stubble between the two sheets of tarpaulin that is used to make makeshift shelters on our tractor-trailer. The stubble helps protect from the cold besides working as mattresses," she said, adding "We are used to all this."

Studies say nearly 30 million tonnes of paddy straw are generated in Punjab and Haryana annually. Nearly seven million tonnes is used for power generation, biofuel, feeding animals and for heat generation, the rest is burnt in the fields, an easy and quick way of disposal.