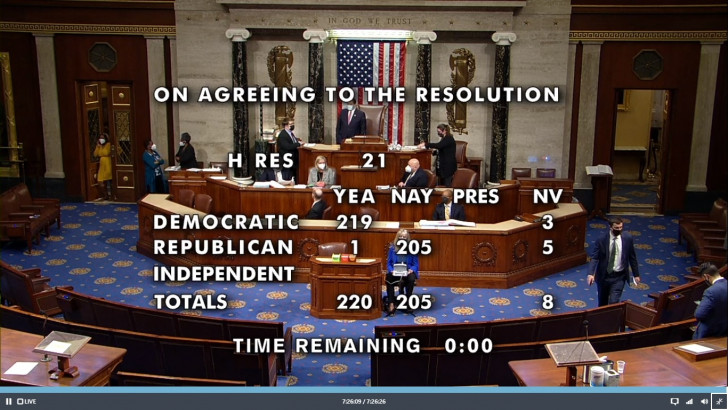 New York, Jan 13
The stage has been set for the second impeachment of US President Donald Trump after Vice President Mike Pence refused take over as president by ousting him in what would amount to a constitutionally sanctioned coup and the House of Representatives passed a resolution demanding him to act.

Pence, who met Trump on Tuesday, wrote to Speaker Nancy Pelosi that he will not accept her request to remove Trump through a constitutional move, flouting her 24-hour notice for him to comply or have Trump impeached.

The House is expected to take up the impeachment of Trump on Wednesday as Pence and the cabinet are unlikely to abide by its resolution and agree to act under the 25th Amendment to the Constitution that empowers him and a majority to shunt Trump out of the White House by declaring him "unable to discharge the powers and duties of his office".

Trump, meanwhile, was unrepentant for the storming of the Capitol by his backers that he is accused of inciting and told reporters, "This impeachment is causing tremendous anger, and you're doing it, and it's really a terrible thing that they are doing."

The draft of the impeachment of Trump has the single charge of "inciting violence against the government of the United States" for his role in the storming of the Capitol by his supporters, who overcame the security and muscled themselves into the Senate chamber, from where Pence had to be taken away by security to a safe zone, and into the office Pelosi.

Trump telling his supporters "we fight, we fight like hell" before asking them to go to Congress is cited as words of incitement.

Trump had asserted that the election was a fraud sent his supporters over the Capitol last Wednesday while Congress was in the process of ratifying the electoral college votes electing Biden after his legal challenges had failed.

Five people, including a police officer died in the rioting.

Support for Trump appears to be eroding in his party with The New York Times reporting that Republican leader in the Senate, Mitch McConnell, is "pleased" about the impeachment according to unnamed sources "familiar with his thinking".

The newspaper said that according to the sources he believed that the measure would exorcise him from the Republican Party, but there was no clear indication if he would actually support it when it reaches the Senate.

He will control the Senate till January 20, when Vice President-elect Kamala Harris becomes it presiding officer with a casting and the two newly elected Republicans have taken their seats in a body that will be evenly divided between the two parties.

Despite the word having a menacing ring to it, an impeachment is only the framing of charges of by the House for a judicial-style trial in the Senate with the Senators acting as jurors. A two-thirds majority of the Senate -- 67 members -- will have to vote to convict.

Trump's impeachment failed in 2019 in the Republican-controlled Senate.

Seventeen Republicans will have to switch sides and vote to convict him, which seems unlikely as of now although some are likely to back it.

The House vote on the resolution asking Pence to "to declare President Donald J. Trump incapable of executing the duties of his office and to immediately exercise powers as acting President" passed with 220 votes, with only one Republican joining the Democrats, and 205 Republicans voting against it.

But Politico, an outlet with deep Congressional coverage, reported that at least 12 Republicans were expected to vote for impeachment when it comes up on Wednesday.

According to reports, many more are willing to support a censure of Trump, which Pelosi has ruled out.

Biden, who seemed to have had reservations about an impeachment trial in the Senate interfering with confirmation of members of his cabinet and other key officials, seems to be veering around to the idea of holding it.

He said that that it was possible for the Senate to try Trump and also to carry on with other business by dividing its time each day.

The House voted the resolution after Pence wrote to Pelosi in reply to her demands, "I will not now yield to efforts in the House of Representatives to play political games at a time so serious in the life of our nation."

"I urge you and every member of Congress to avoid actions that would further divide and inflame the passions of the moment," he said.

The Federal Bureau of Investigation has issued a warning about violence breaking out across the nation next Wednesday when Biden and Harris will be sworn-in and take over the nation's leadership.

It said that it had information that extremist groups were planning armed protests from the weekend through Wednesday.

It added that they also planned to attack government offices around the country if Trump were removed through the 25th Amendment.

About 15,000 armed National Guard troops are to be deployed around Washington to ward off possible attacks.