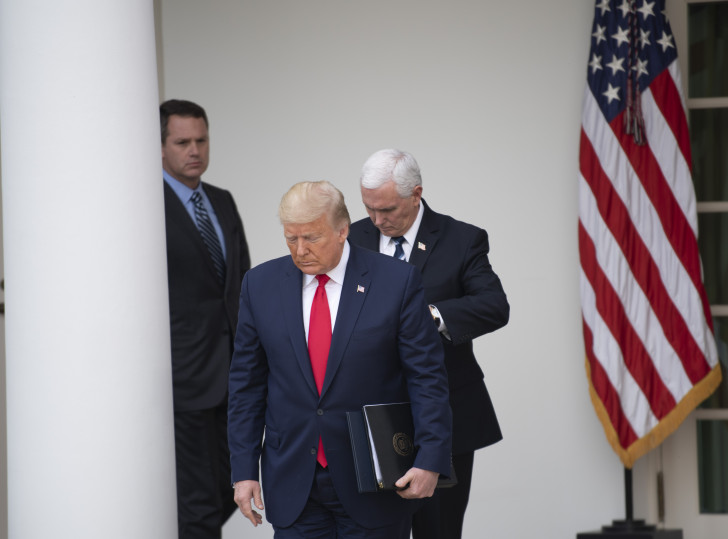 With only seven days left for him in office, Democrats raced against time to impeach Trump on charges of inciting the storming of the Capitol last Wednesday, dispensing usual procedures to try to vote on the articles of impeachment by afternoon.

Trump has been unrepentant about the riot that resulted in the deaths of five people, including one police officer, after his rally of supporters against the election of Joe Biden as President and Kamala Harris as Vice President alleging fraud in the voting.

Late Tuesday night, the House passed a resolution demanding that Pence assume the presidency by invoking Article 25 of the Constitution that allows him, acting with a majority of the cabinet, to remove Trump.

Even before the House voted the resolution, Pence wrote to Speaker Nancy Pelosi: "I will not now yield to efforts in the House of Representatives to play political games at a time so serious in the life of our nation."

"I urge you and every member of Congress to avoid actions that would further divide and inflame the passions of the moment," he said.

Despite the word having a menacing ring to it, an impeachment is only the framing of charges of by the House for a judicial-style trial in the Senate with the Senators acting as jurors. A two-thirds majority of the Senate - 67 members -- will have to vote to convict.

Trump's impeachment failed in 2019 in the Republican-controlled Senate.

To convict and throw his out of office, 17 Republican Senators will have to vote for it.

If after impeachment is passed by the House, the Senate trial stretches beyond next Wednesday, when Trump will be out of office, and a conviction, if it comes about, may only have the effect of preventing him from running for office in future, besides being a ringing condemnation.

To speed up the impeachment process, most Representatives gave short speeches of one to two minutes, with Democrats recalling the horror of the riot that reached into the Senate chamber and the Speaker's Office and asserting that Trump incited an "insurrection."

Democrat Jim McGovern said: "What Trump did fill me with rage. We were terrorised."

The draft of the impeachment of Trump has the single charge of "inciting violence against the government of the United States" for his role in the storming of the Capitol by his supporters, who overcame the security and muscled themselves into the Senate chamber, from where Pence had to be taken away by security to a safe zone, and into the office of Pelosi.

Trump telling his supporters "we fight, we fight like hell" before telling them to go to Congress is cited as words of incitement.

The Republicans' arguments against the impeachment was to raise procedural questions and assert that it would divide an already polarised nation further.

Republican Representative Tom Cole said the House should does not rush to judgment and should look for ways to unite the country when the new President takes over.

An impeachment of Trump failed in 2019 when the Senate failed to convict him.

After the experiences of last week, the Capitol building was ringed with high security with National Guard troops deployed at entrances to the Capitol.