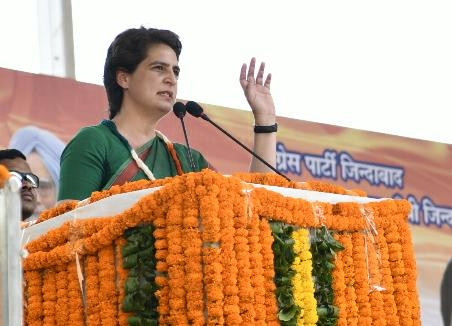 Lucknow, Jan 25 Congress general secretary Priyanka Gandhi Vadra has lended financial support to the family of a party worker who died in a road accident while he was on his way to attend a party programme.

"Tribhuvan Singh, a party worker from Ghazipur district died in a road accident while he was going to attend a nyay panchayat meeting in his area with his block president," a Congress functionary said.

Priyanka Gandhi Vadra spoke to the family members and came to know about the financial condition of his family.

She then assigned party secretary in-charge Bajirao Khade to reach out to the family and provide financial help of Rs 2 lakh from the party.

On Sunday, Bajirao visited the family of Tribhuvan Singh and handed over the aid to them, the functionary said.

Since the past 45 days, Uttar Pradesh Congress has been running Sangathan Srijan Abhiyan phase II. It is intended to form nyay panchayat committees and elect nyay panchayat presidents.

For the last one-month, district observers have been stationed in their respective district to do the groundwork.