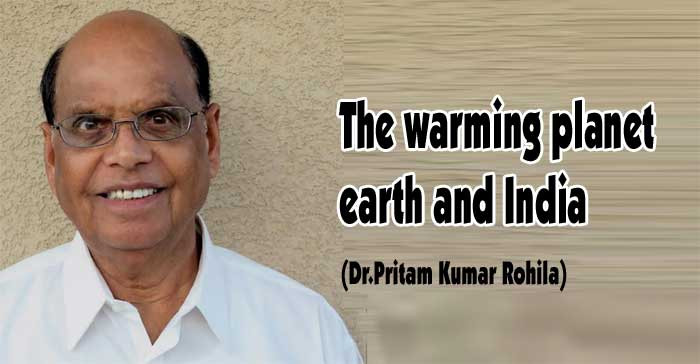 In the last several months, coronavirus has devastated humanity everywhere. But increasing warming of the Planet Earth is becoming a much greater threat to the world.

There has been a relatively rapid increase in the global ocean and soil temperatures, during the past century. All of the top 10 warmest years have occurred since 1998. The hottest six years on record have been the past six. Even some places north of the Arctic Circle have recently registered the record-setting temperature of 100.4.

Besides, snow cover in the Arctic is shrinking. Ice shelves in the Antarctic are collapsing. Glaciers and permafrost in the Himalayas and elsewhere are melting. Consequently the overall sea level is rising. It rose about eight inches over the last century and is expected to increase about three feet by 2100.

The rising sea level will inundate low-lying areas with saltwater, adversely affecting coastal habitats. Most of atolls islands, including those in the Maldives and India’s Lakshadweep, would become uninhabitable. Seventy to 90 percent of coral reefs may disappear altogether, in the next 20 years.

Storms have started forming earlier and lasting much longer than usual. Also they are becoming more frequent, more intense, and more catastrophic. The trend will likely continue in future.

Every year, usually three cyclonic storms make landfall in India. But there were five of them in 2020, making it the third consecutive year of above average cyclonic storm activity. Also it was the second year in a row to have a Super Cyclonic Storm.

In India, typically more cyclonic storms form in the Bay of Bengal than in the Arabian Sea, making the eastern coast more vulnerable to them. But in 2020, the Severe Cyclonic Storm Nisarga was the first since 2009 to make landfall in Maharashtra, on the Arabian Sea coast.

All together in 2020, the cyclonic storms in India caused several hundred million dollars’ worth of damage and more than 230 deaths. Most of the casualties were caused by flooding on the coast from tidal waves and storm surges.

Each year, wildfires destroy millions of hectares of the world's forests. In the process, carbon locked in the biomass is released, wild flora and fauna are adversely affected, and there is loss of human life and property.

Between 1979 and 2013, globally the length of fire season increased by nearly 19 percent. Also the fire season has been starting earlier than usual. According to a report by India’s Parliamentary Standing Committee on Science and Technology, the country has seen a substantial increase in the number of wildfires in the last several years. Their intensity and extent also have increased over the past twenty years.

Distribution and behavior of animals, birds and plants are being affected by climate change. Plants bloom and mammals come out of hibernation earlier in the year than usual. Birds arrive at their nesting grounds and lay eggs earlier in the year.

Many of the world’s species have started moving in search of more hospitable climates. Some species cannot move any further and some cannot move as fast as they need to. About half a million terrestrial species lack sufficient habitat to survive, in the long-term, according to a 2019 U.N. report. If these trends are not reversed, a quarter of animals and plants may become extinct, according to some experts.

Also, there may be fewer adequately cool days during the winter, and more frequent cold-season heat waves. There may be increase in heating and cooling costs. Some diseases and pests may spread more easily. These changes can disrupt life, change agricultural practices and affect industrial production.

Changing rainfall patterns associated with climate change will definitely affect agriculture and those who rely on it everywhere. At places even within the same regions, there may be more intense periods of heavy rain and flooding followed by longer dry periods. There may be severe droughts, reduced crop production and major drinking water shortages. Areas where soils are neglected, diversity is reduced, and fertilizers and pesticides are used heavily may be more vulnerable to changing climate.

According to World Bank, sectors in India, that are vulnerable to climate change, include agriculture, water resources, coastal economies, and health. Also the country needs to address environmental stressors such as land degradation, poor air quality and unsustainable groundwater use.

Certain populations, including low-income, tribal and rural communities, tribal and rural areas, are particularly susceptible to climate change. Also they are less able to respond to and cope with its effects.

There are 290 million low-income people in India, who live below the international poverty line of $1.25 per day. Like everywhere else these poor people will be impacted the most by the changing climate. And more than 60 percent of Indians, who depend on farming for their livelihood, may be overwhelmed by climate change associated weather events like droughts at some place and excessive rainfall at others. Also it may not be easy to dissuade the 70 percent of Indians, who use firewood and dung to cook and warm themselves, which contribute to greenhouse gas pollution as well as to their risk of diseases like lung cancer and pneumonia.

Climate is changing. We cannot hold it steady. We have to find ways to protect nature and people, while the climate changes.

According to Friederike Otto, Acting Director of the University of Oxford Environmental Change Institute, "There is absolutely no doubt that the extremely high temperatures are higher than they would have been without human-induced climate change.

As Jennifer Morris, Chief Executive Officer of The Nature Conservancy points out, many of these problems are “deeply rooted in the policies and practices that govern our society, and they require more than Band-Aid fixes.” We need holistic, durable solutions that help our communities and nature become resilient.
__
*Dr. Pritam Rohila is an Oregon-based, retired neuropsychologist, who loves writing, photography and traveling.