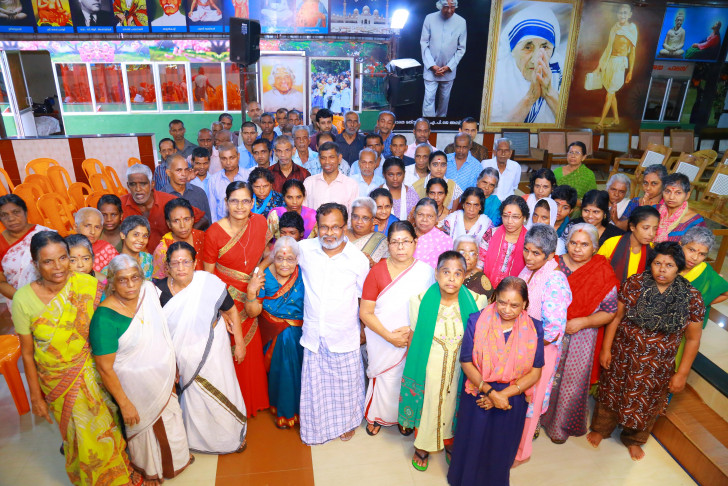 Thiruvanathapuram, Jan 31 Gandhibhavan situated on the banks of Kallada river in Pathanapuram, Kollam district of Kerala, can be considered as the largest joint family in Asia with destitute, orphans, cancer patients, HIV patients, TB patients, mentally deranged and terminal ill paraplegics living together in this serene ambience and atmosphere. Presently Gandhibhavan houses around 1,200 people - men, women and children from one year old toddlers to a 100-year-old grandmother.

Punalur Somarajan, the moving force behind this institution which is named after Mahatma Gandhi, was a college teacher and had strived for the love and care of his mother whom he had lost when he was very young. Somarajan while speaking to IANS said, "I got this trait of helping others and supporting those under distress from my father, who used to bring home children and old people whom he found on the streets, provide them a square meal, a new pair of dress and a place to sleep."

Among the 1,200 inmates of Gandhibhavan, 300 are terminally ill and many are suffering from acute diseases. However, the institution takes care of each of them. A dedicated team of around 300 volunteers is on round the clock duty.

When any person is found on the street in an abandoned condition in the southern districts of Kerala like Thiruvananthapuram, Kollam, Pathanamthitta, Idukki, Kottayam and even Ernakulam, the state police take them to Gandhibhavan. Such is the credibility of the organisation.

Gandhibhavan which started functioning in November 2002, has now grown into a major institution and Somarajan, the pillar of strength of the organisation and a good Samaritan, runs from pillar to post to feed and house the inmates whom he consider as his brethren.

Somarajan said, "We need Rs 3 lakh per day for managing the affairs of the organisation. However, there are good people in this world and they all support us without any excuse. Though we suffered a lot during the Covid but managed somehow."

Vijayamma, an inmate of Gandhibhavan, said, "We are trained in paper bag making, soap making and pen making. Items made by us are sold at Gandhibhavan outlet which is situated here itself and the visitors buy these items which generates revenue for the institution."

TP Madhavan, former President of the Association of Malayalam Movie Artists (AMMA) and a noted character actor of Malayalam tinsel world, is now an inmate of Gandhibhavan. Several former stage artists, theatre personalities, dubbing artists and people from all walks of life have found an asylum and care in Gandhibhvan and Punalur Somarajan.

The main ambition of Somarajan is to open a "Janakeeya Medical college", with all streams of medicines being taught including Allopathy, Ayurveda, Homeopathy and Siddha.

Gandhibhavan prides itself in cleanliness and can be considered as a role model for Swachh Bharat initiative. The organisation received the food safety license, water inspection certificate and sanitation certificate from the Union government.

Gandhibhavan is a sub-centre for Kerala Sangeetha Nataka Akademi where drama and other programmes sponsored by the academy are being demonstrated on a regular basis. Seminars on various subjects, literary debates, legal awareness programmes, health seminars, green-sanitation awareness programmes and medical camps are organised periodically here which was frequented by former President APJ Abdul Kalam and several other dignitaries.

There are routine prayer meetings at Gandhibhavan with prayers in the morning, midday and evening. People from various religious beliefs take part in these prayer meetings which is one of the most important activities of the organisation.

Kerala's top notch NRI businessman who is a regular in the Forbes list of rich men and the richest Keralaite in middle east, Padmasri MA Yusuf Ali is a major support for the institution and is totally supporting the construction of a multi-storey building for housing the inmates with all the modern facilities. The cost is likely to be around Rs 15-20 crore which he is bearing single-handedly.

Somarajan said, "We struggled a lot and are still struggling but ultimately someone brings us food and other necessities and we somehow manage. The dedication and commitment of all those who support us is exemplary. Yusuf Ali has been a major source of strength to us and we are totally indebted to him for the love and care shown by him towards the institution and the poor inmates who have no where to look upon to."

Two former Kerala Assembly legislators spent their final days at Gandhibhavan and even those who are managing the institution were surprised when they came to know that the frail old men who had sought shelter at the institution were powerful people's representatives who did not receive care and love at their own homes.

Sachin Anand, film actor and a member of the Gandhibhavan, said, "Gandhibhavan is a spiritual place and we are indebted to the will power and strength of Somarajan, whose leadership qualities have helped so many people here. It's miracle."

Bhuvanachandran, assistant secretary of Gandhibhavan who is considered the right hand of Punalur Somarajan, said, "We do this work with all the right earnest and the results are visible to all. We faced several hardships but we overcame everything with the will and determination of Somarajan. The whole team works like a well oiled machine and we are on call 24x7x365."

"Gandhibhavan is an extended joint family as everyone including Somarajan, his wife, married son and daughter live here in the campus only with the inmates," Bhuvanachandran added.