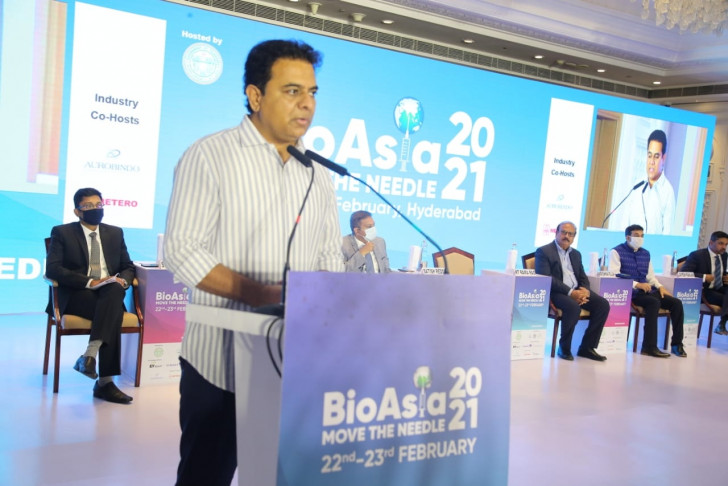 Hyderabad, Feb 22
Buoyed by the tremendous growth in the life sciences industry in Telangana amidst the pandemic over the last one year, the state government has set the vision to growing the sector to $100 billon dollars by 2030.

"Our dream and vision of growing the life sciences industry to over USD 100 billion looks plausible and we remain committed to it," state's industry minister K. T. Rama Rao told Bio Asia 2021, the annual flagship event which began here on Monday.

The life sciences sector in Telangana in terms of value is $13 billion while in terms of cluster revenues it is $50 billion. The potential for next 10 years is to move up to $100 billion of ecosystem valuation, said Dr Satish Reddy, Chairman, Reddy's Laboratories, who heads the advisory committee constituted by the state government to prepare vision 2030 for the sector.

KTR, as the minister is popularly known, claimed that Hyderabad's life sciences ecosystem came forward and showed its fortitude in the last one year. He pointed out that when then US President Donald Trump requested Prime Minister Narendra Modi for supply of Remdesivir, they had to look towards Hyderabad.

He said the visit of foreign envoys from over 60 countries and that of the Prime Minister to Hyderabad's Genome Valley is a testimony to the cluster's significance in the global context.

KTR said Bharat Biotech's remarkable contribution and commitment to develop India's first indigenous vaccine for Covid-19 is laudable. He also termed the efforts of Biological E, Indian Immunologicals and others as very significant and laudable. In addition, Hetero pharma and Dr. Reddy's are augmenting the global supply by manufacturing and distributing Russian vaccine Sputnik. Further, Aurobindo Pharma is building world-class vaccine manufacturing facility with a capacity of about 450 million doses.

He exuded confidence that significant global population will be immunised with vaccines produced in Hyderabad saying this is no small feat to accomplish.

He pointed out that the life sciences sector in the state has attracted investments to the tune of about Rs. 3,700 crores in last one year with an employment potential for around 14,000 people.

"A feather in our cap has been the approval of Umbralisib for cancer treatment. It is historic because this is the first drug ever discovered in India and approved by the US FDA. I am extremely proud that the discovery of Umbralisib is led from Incozen's facility in Genome Valley."

He recalled that Sai Life Sciences, a leading contract research organisation, inaugurated its new Research & Development centre at Genome Valley with an investment of about Rs. 400 crores. Syngene, which inaugurated its campus in Genome Valley during last BioAsia, doubled the scientist count to 225.

GVK Bio, another Hyderabad-based company focused on supporting global innovators, is also expanding rapidly and will be adding 600 new jobs this year in Hyderabad.

Granules India will invest about Rs. 400 crore to set up a facility with capacity to manufacture 10 billion units of finished dosages that will generate employment for about 1,600 persons. Laurus Labs is investing Rs. 300 crores to set up a formulation facility in Genome Valley with a capacity of 5 billion units.

The Indian Council for Medical Research (ICMR) is also establishing the country's largest National Animal Resource facility for biomedical research in Genome Valley. This is expected to be inaugurated soon.

The Bio Asia inaugural saw signing of a Memorandum of Understanding (MoU) between the state government with Cytiva to set up a Biopharma scale up facility - B-Hub in Genome valley. As eight out of 10 top selling drugs globally today are biopharmaceuticals, B-Hub will help Telangana and India in accelerating the growth of biopharmaceutical sector. KTR was confident that Telangana will emerge the biopharmaceutical capital of India.

He said he was personally bullish about the medical devices sector. About 40 companies are establishing their manufacturing / R&D facilities at the Medical Devices Park at Sultanpur in Rangareddy district. Some of these companies have already started commercial production and many of them are lined up for commencement by end of this year.

The minister said global medical devices major Medtronic's largest innovation and engineering center in Hyderabad will be inaugurated next month. The company last year announced one of their biggest investments - $170 million - globally r to establish the facility.

"In addition, we are also working on several other exciting initiatives such as Digital Medicine Hub, Institute for Cell and Gene Therapy, Flow Chemistry Hub, a world class life sciences university, and many more to build strong foundations for the next generation opportunities and to support our aspirations," he added.

Jayesh Ranjan, secretary, industry, government of Telangana, said the 18th edition of Bio Asia was being held despite the prevailing situation. He noted that annual life sciences convention has evolved as pre-eminent global meeting for researchers, academic, industry, stratups and governments.

The two-day conference with the theme 'move the needle' is being held virtually. He said 30,000 participants have registered for the event, the highest in its history.