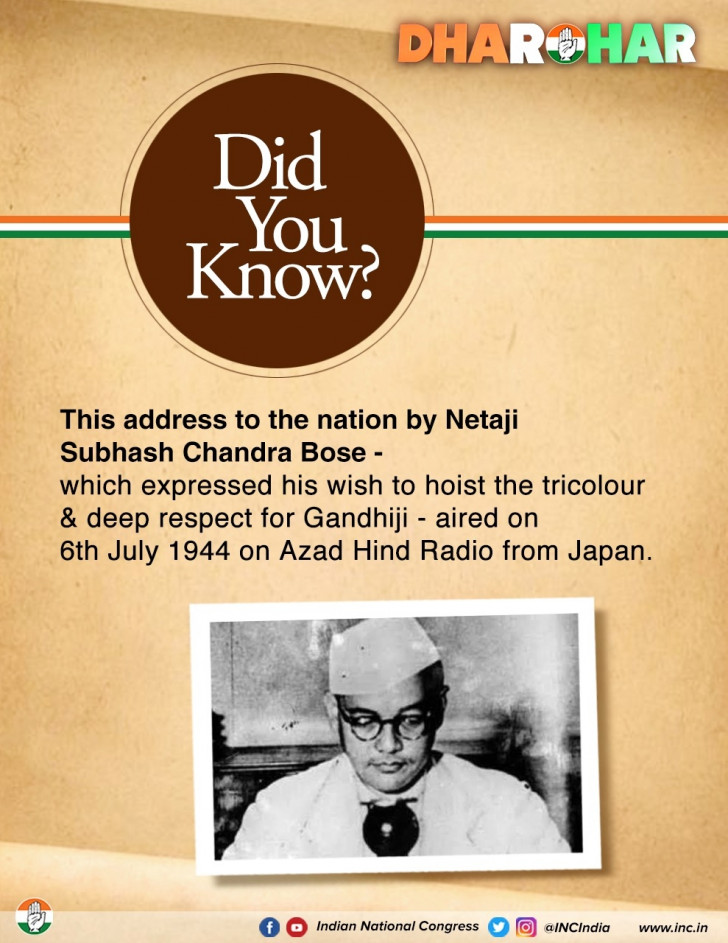 New Delhi, March 3 Ahead of the West Bengal elections, the Congress on Wednesday released a documentary on Netaji Subhash Chandra Bose in its video series named "Dharohar" and released it on all its social media platforms with the hashtag #DeshKiDharohar.

Sources within the party said the series has nothing to do with the election, but is part of a series which the Congress is making on the party's contribution in the freedom movement.

Rohan Gupta, party's social media head said, "The video series is to counter the BJP's false propaganda as the BJP is distorting facts through WhatsApp university, and party is therefore putting things in order before the public."

But sources said that ahead of the Bengal elections, the BJP is trying to capitalise on Netaji which the Congress wants to counter.

The Congress tweeted while releasing the video series: "Divisionary & hateful forces have always sought to disregard the idea of India - our unbreakable unity, our Constitutional equality, our unwavering dedication to the Tricolour. But come what may - we will emerge victorious over them."

"Away from home or from within it; in the best or under the worst circumstance, a true patriot has only the nation's best interests at heart -- Netaji personified this. From Netaji to Pt. Nehru and for every true patriot, Mahatma Gandhi will always epitomise Desh bhakti. It is forces that want to divide our motherland who oppose him -- then and now," the tweet said.

Rohan Gupta pointed out that there was a Nehru Brigade in the Azad Hind Fauj which means that there was no difference between Netaji and Nehru, and the BJP was distorting history and it was Netaji who called Gandhiji the 'Father of the Nation'.

"To truly love our nation one needs to have an unwavering dedication to our Tricolour; some ideologies may disagree but Netaji and the Congress party epitomise this. Netaji's most famous words -- 'Give me blood & I will give you freedom' - reinvigorates every true patriot pouring their blood, sweat & tears into peace, progress & prosperity of our motherland. Then, now & always. Why, where & when did Netaji Subhash Chandra Bose first call Gandhiji "Father of the nation"? Find out the answers to this & more in this episode of Dharohar," tweeted the Congress.

There is an intense battle going on in West Bengal between Trinamool Congress and the BJP, while the Congress is in alliance with the Left and trying to make the contest triangular. West Bengal will see elections in eight phases with counting of votes on May 2.