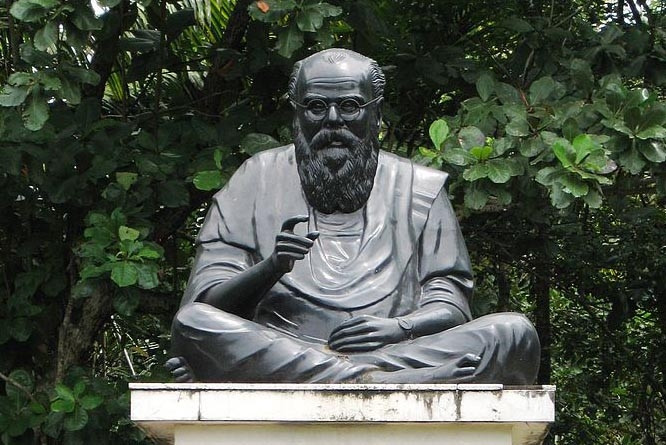 Chennai, March 6 : The BJP and Dravidar Kazhagam (DK) leadership are raising allegations and counter allegations over the desecration of the statue of Periyar EV Ramaswamy in front of Sirkazhi DSP office, which was found smeared with saffron and ash on its forehead, on Saturday morning.

"The BJP and RSS combine is responsible for the desecration of the statue of EVR Periyar and we will not take this by lying low. Will give a fitting response to them," Myladuthurai unit president of DK, MR Maniyan told IANS.

Erode Venkita Ramaswamy Nairkar Periyar or EVR Periyar was a leading light in the rationalist movement of Tamil Nadu and had come out against all Brahminical rituals.

The smearing of saffron and ash on his statue is considered a very big offence by his followers and sympathisers.

The Bharatiya Janata Party (BJP) leadership has, however, distanced itself from the issue. BJP leader Velmurugan, who is in-charge of Myladuthurai and Sirkazhi areas, told IANS: "The BJP has no need to desecrate the statue of EVR and anyone who has done this has cheap intentions which the BJP will never do."

"We are a political party with nationalist beliefs and if we are opposing an ideology, we will do it in the open as we always do. There is no need to smear the statue of a person with saffron and ash to stamp our ideology. These are all gimmicks during election time to which we don't subscribe."

Police have not taken any chances and are on alert in the state.

DSP of Sirkazhi, S. Mahendraraj told IANS: "The situation is under control and there is no issue at present. Police is on alert and we will find out the real culprits behind this."

In Tamil Nadu, the Dravidar Kazhagam is a social movement founded by EVR Periyar and he has a cult status among his followers. The police and home department do not want any major issues cropping up following the smearing of saffron and ash on the forehead of his statue.