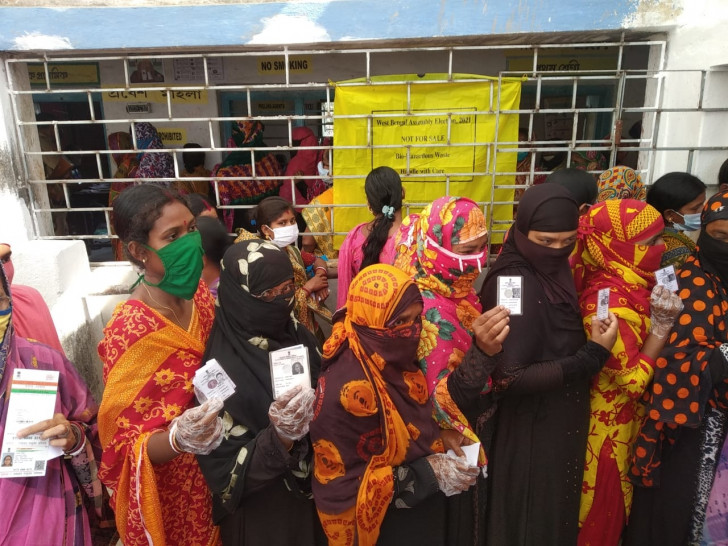 According to Election Commission data, 14.62 per cent polling was recorded in the first three hours of polling much on the lines of phase-1 and phase-2 polls held on March 27 and April 1 respectively.

There were reports of violence from Goghat in Hooghly where BJP alleged that a mother of a BJP worker was killed by the Trinamool goons last night. Similarly, Trinamool Congress alleged that people were not being allowed to vote in different booths of Sasta, Dagira, Babuldanga and Diamond Harbour in South 24 Parganas.

The Hooghly district, where 7 constituencies are going for the polls, recorded the highest percentage of 17.35 per cent followed by Howrah district where 15, 52 per cent poll was recorded in the 8 constituencies.

The 16 constituencies of South 24 Parganas recorded the lowest percentage of 12.81 in the first three hours of polling.

According to reports, sector officer Tapan Sarkar, who was in-charge of Sector 17 in Uluberia seat, had spent the night at a relative's house who happened to be Goutam Ghosh. The EVMs and VVPAT machines with Sarkar were part of the reserve stock. The commission has said that these EVMs won't be used for voting on Tuesday.

A three-cornered battle is being witnessed in the 31 Assembly seats.

The total number of third gender voters are 243 while overseas voters are only 2. The election data also shows that 205 candidates, including 13 females from different political parties are in the fray during the third phase of polls that covers parts of South 24 Parganas, Howrah and Hooghly.

Marking all the 10,871 booths 'sensitive', the Election Commission of India (ECI) has decided to deploy 618 companies of Central forces for the third phase and has also retained another 89 companies of central forces from the second phase, who are already stationed in South 24 Parganas and that pushes up the number of forces to 707 companies -- the highest deployment in this election so far.