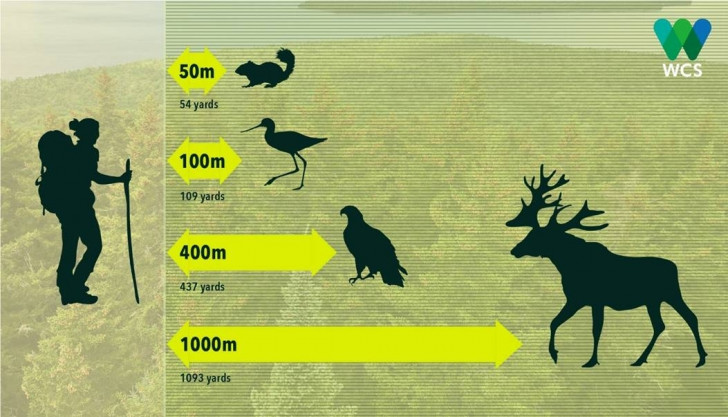 New York, April 22 : Six feet of social distance may be the new norm between people, but a new Wildlife Conservation Society (WCS) report says "if you don't want to disturb wildlife, you need to keep way back".

The report, which will soon be published in the journal Nature Conservation, looked at 38 years of research on the effect of non-consumptive recreation, such as hiking, on wildlife to attempt to identify the point at which recreation begins to trigger behavioral or physiological changes in animals.

Outdoor recreation is increasingly recognized for its potential negative effects on wildlife individuals and populations, yet planners and natural resource managers often feel they lack robust scientific recommendations to inform the design of recreation infrastructure and management of recreation activities.

Cristina Mormorunni, Regional Director of WCS's Rocky Mountain Program, said: "Recreation's footprint is growing, especially during Covid, both in scale and duration. Now it is year-round and penetrating further and further into wildlands.

"We are working hard to elevate these realities and engage the outdoor industry and the public and work collaboratively to lessen our impacts on wildlife and wildplaces."

The authors did not find a significant difference between threshold distances of different recreation activity groups.

In addition, there were large gaps in the scientific literature regarding several recreation variables and taxonomic groups, including amphibians, invertebrates, and reptiles.

The findings highlight the need for additional studies to measure effects on when, where, and what types of recreation lessen their impacts on wildlife.

A deeper understanding of recreation ecology will be important both for outdoor enthusiasts, and to provide better recommendations to natural resource managers tasked with conserving biodiversity while providing human access to public lands.