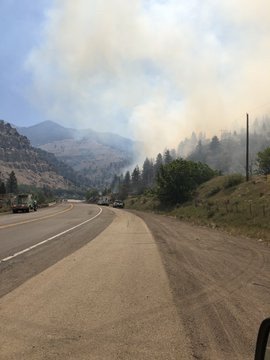 Washington, June 11 : Multiple wildfires are currently raging in the US state of Utah, with authorities warning of escalating danger due to extreme drought.

On Thursday, officials closed some parts of US-6 freeway hours after it was briefly reopened, in Carbon County due to a wildfire, dubbed Bear Fire, which was believed to be started by a lightning strike, reports Xinhua news agency.

The Bear Fire was estimated to be nearly 5,500 acres with zero per cent containment on Thursday, and fire weather conditions in the area were expected to reach "extremely critical" status.

The San Juan County Sheriffs Office said winds had picked up considerably in the morning, with wind gusts anticipated to reach 40+ MPH (64.4 KMP) throughout the day.

"The Pack Creek Fire has grown to 400 acres, zero per cent contained. Structures are threatened, all homes in the Pack Creek community have been evacuated. One structure destroyed." Utah Fire Info tweeted Thursday morning, adding the fire was started by an unattended campfire.

State Governor Spencer Cox on Wednesday issued a prohibition on fireworks for all state and unincorporated lands as the region was predicted by experts to move into what could be its worst fire season in history.

Basil Newmerzhycky, a meteorologist with the Bureau of Land Management's Great Basin Predictive Fire Weather Program, was quoted by the Salt Lake Tribune as saying that this year's drought could be one for the record books.

The drought was particularly worrisome since the driest conditions don't usually arrive until August or September, the report added.

The latest data updated Wednesday by the Utah Division of Forestry, Fire and and State Lands, the state had already tallied 326 wildfires this year, with 12,000 acres burned and 90 per cent of the ignitions being human-caused.