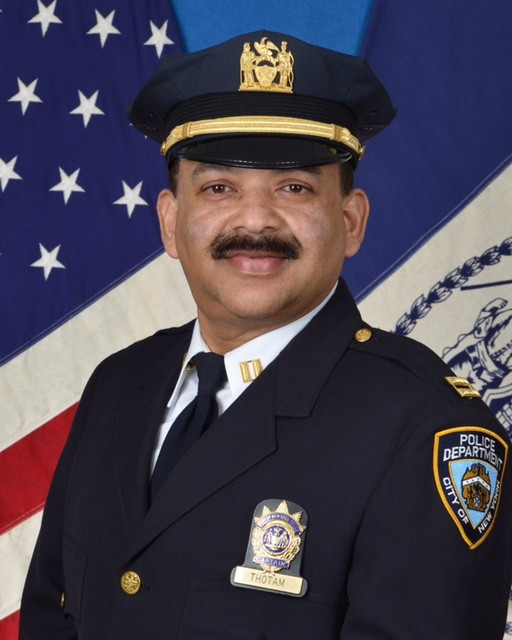 Liju P Thotam has become a Deputy Inspector in the New York City Police Department, the first Indian American to reach the level.

Liju Thottam came to at the age of thirteen when he was in eighth grade. He graduated with a degree in aeronautical engineering but did not work in the aviation industry for long. He worked briefly with Panam and Delta. He joined the police in 1996 to fulfill his childhood dream of becoming a police officer.

Currently he is the Executive Officer of Forensic Investigations Division (FID). The Division is headed by Deputy Chief Katranakis. FID oversees all forensic investigations of the police department and also manages subunits such as Crime Scene Unit, Police Laboratory, Firearms Analysis Section, and Latent Print Section.

These subunits have accreditation with international accreditation bodies. Passing accreditation inspections  keeping the high standards is a tremendous responsibility for the FID management team

Thotam  assists the Commanding Officer in overseeing the above units and coordinates investigative operations with other investigative units like Precinct Detective Squads and other government agencies like  Office of the  Chief Medical Examiner, District Attorneys offices etc.

Some people accuse the police for discrimination, which he disagrees. “Police Department as an institution has established guidelines for appropriate behaviors and anti discrimination policies for all of its members. I would say in my experience most people follow the sprit and letter of that policy and guidelines most of the time.”

He is also concerned about the calls for defunding and controlling police work. “Violent crimes in many cities are going up by double digits. Cutting resources/budget for training, equipment, recruitment and retainment of qualified individuals and other crime fighting efforts may be counterproductive. Violent crimes affect the poor and minority communities the most.

“Police involved shootings have been on a  decline in for more than 3 decades.  Today NYPD Officers are more diverse, better, educated, better trained and equipped than ever before.

Public safety is joint responsibility of all responsible citizens, it cannot be left to the police alone.”

Police work has its own benefits and risks, Thotam earlier said. “I remember responding to a burglary in progress 911 call from a Desi woman. She was found hiding under a bed, holding her infant's mouth to prevent the armed and drug crazed burglar from hearing her infant as he was rummaging through the house looking for valuables.

“The sense of relief on that lady's face, as she first saw us entering her room, where she was hiding, gives immense satisfaction to an officer. An active policeman has many  gratifying events during his days, heroic or not, that makes the inherent risks of the profession worthwhile,” he said.

“Even though is much safer than it was, police officers go to work knowing, there is an increased probability of getting seriously hurt in the line of duty or not returning home at the end of the shift.

“It is a job where you could be sitting in the patrol car observing traffic conditions one minute but the next minute you could be responding to a 911 call and confronting an armed career criminal or an emotionally disturbed person. As a colleague said it only takes seconds to go from boredom to chaos in police work.”

Though he wants to see more Desi offices in the rank, he has advice also for the aspirants. “Becoming a police officer simply because it is comparatively a secure job with decent salary and benefits may end in disappointment for all parties. I believe police service is a calling which requires a level of discipline, sacrifice, and benevolence and it is not for everyone regardless of race or ethnicity.”