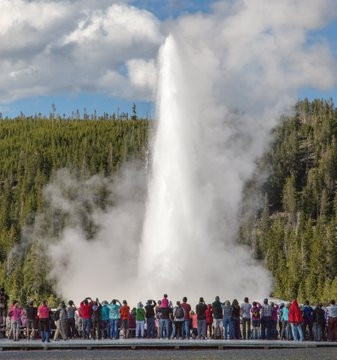 Washington, June 12 : One of the largest in the US which spreads across the states of Wyoming, Montana and Idaho, the Yellowstone National Park had more visitors last month than it has witnessed during any other May on record.

Yellowstone hosted 483,159 recreation visits in May 2021, an 11 per cent increase from May 2019 (434,385 recreation visits) and the most visited May on record, park officials said in a statement issued on Friday.

"May 2020 should not be used as a good year-to-year comparison due to the park being closed until May 18. Only two of the park's five entrances were open for the rest of the month," Xinhua news agency quoted the statement as further saying.

Yellowstone also welcomed a record number of visitors in April this.

"One of the unintended consequences of Covid, if you think of last year, we had departments closed for two months, we had no international travel and we had a lot of domestic trepidation around traveling," Yellowstone National Park Superintendent Cam Sholly was quoted as saying by the Billings Gazette, the largest newspaper in Montana.

"This year there was no closure, international travel started to pick up and there is no trepidation about domestic travel," he noted.

Park officials added that summer is Yellowstone's busiest season as millions of people visit the park in June, July and August.

They urged visitors to plan ahead, expect crowding and recreate responsibly for this summer's trip.

Established by Congress and signed into law by President Ulysses S. Grant on March 1, 1872, Yellowstone was the first national park in the US.

In 1978, Yellowstone was named a Unesco World Heritage Site.

It is known for its wildlife, including grizzly bears, and its many geothermal features, especially Old Faithful geyser, one of its most popular.