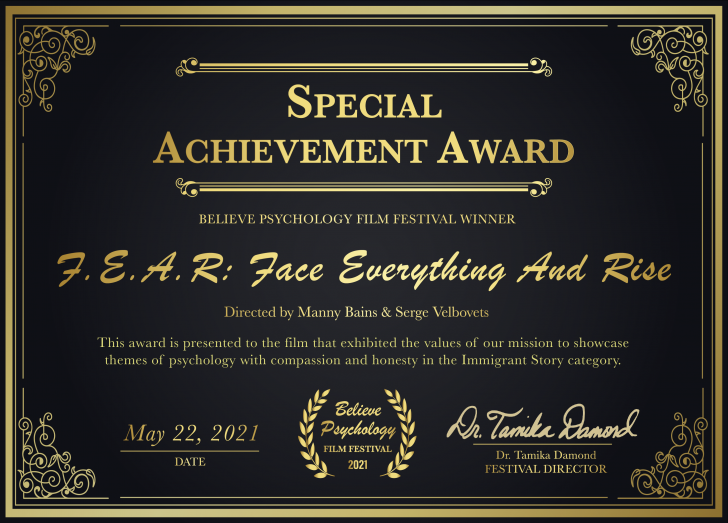 Toronto, June 12 : The film F•E•A•R: Face Everything And Rise features the exceptional courage of Annie Koshy, an Indian born Canadian, as she shares her personal story of being torn between cultural norms and her dreams of being a successful businesswoman and entrepreneur. She is a role model for many women who are seeking to unshackle themselves from cultural expectations and break free from the social stigmas that keep them boxed in. The film, which was produced under the banner of GTA South Asian Media Network Inc and the Rising Star Experience, has been recognized across the world with over thirty awards or selections. The latest awards received are for Best Original Score (Jayadeven Nair et al) and Best VFX and Colour (Serge Velbovets).

Directed by Manny Bains (Rising Star Movie Experience) and Serge Velbovets (Velbix Films), F•E•A•R features expert contributions by Satish Verma, and Rav Bains. Shot in and around Toronto for the most part, the film features original footage from central and southern India. Both Annie and Jayadevan Nair are from the southern state of Kerala. His involvement in segments of the background score helped bridge the east-west components of the film. The film score as a whole is a combination of pieces by Vishal Gupta, the Cocophonic team of Tony Singh, Julia Tynes and Randy James and Jayadevan Nair with contributions from other talented composers from around the world.

Manny is passionate about creating films that bring about social change, that can have a big impact on the world at large. He continues to lend himself to passionate, empowering projects that align with his morals and values and help the world move to a more empowering, and more positive place. “During the shooting process, I felt a stronger connection with this issue, and as I watched the playbacks I became more emotionally involved with this subject matter. It was a bit of an emotional ride, to say the least. I hope F.E.A.R can inspire many people to live their dreams and have the courage just like Annie did, to break through the barriers to live a fuller and joyful life and thus become happier, fulfilled and become a bright shiny light  for others to follow as well.”

For Serge Velbovets, this film touches the nerve of the global society we all live in. "This film relates to the systemic society problems that go far beyond the South Asian Community. The topics the film raises are related to many countries and regions. As for a film director with a background in journalism, it was very important for me to make this film as authentic as possible. That's why all interviews were unscripted and all emotions were raw and real. I saw Annie going through all circles of her pain again during the interviews, but I believe this pain will empower so many women around the world who appeared in the similar situation"

WorldFest Artistic and Program Director Kathleen Haney said,“We feel that it is impossible to properly emphasize individual films when the festival screening schedule is too large. We will concentrate on only the very best, selecting new American & Foreign Independent films that truly deserve a premiere at WorldFest. By doing so, we can concentrate on the films and their filmmakers and enable our faithful audience the opportunity to see each and every film!”