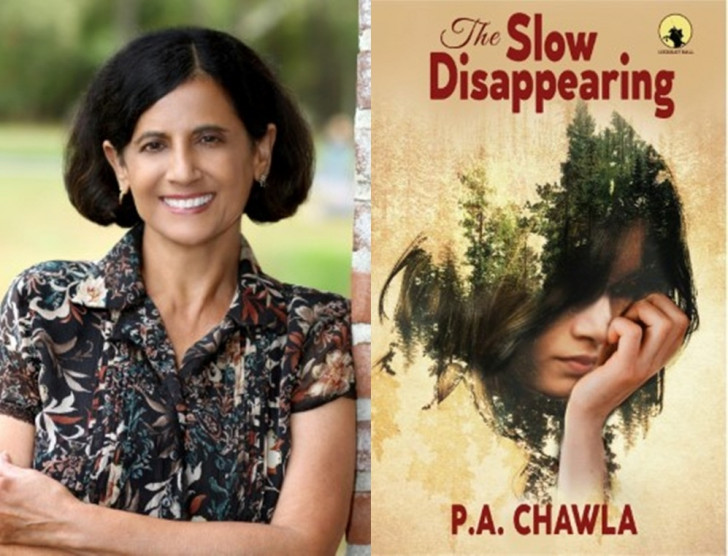 New Delhi, July 10 : Everything in our lives warps and unravels with the passage of time, says P.A. Chawla, a fan of T.S. Eliot, which explains her nom de plume, of her new book, "The Slow Disappearing" , part memoir and three parts fiction that suggests fading relationships as well as a fading memory, the writing of which she describes as a "wonderfully cathartic experience".

"The title suggests that everything warps and unravels with the passage of time. What are we if not our memories? We wrap our friends, our families, our achievements about us, only to find them slowly disappearing," Chawla told IANS in an interview.

Born in Mumbai, after a whirlwind romance and marriage four decades ago, she moved to the US, where she lives in New Jersey with her husband of 33 years and two beautiful children.

Quite naturally, the book, published by Locksley Hall, has parallel themes. For example, the protagonist moves abroad, and her country, as well as her family, disappears.

"From Indian to resident alien can be a torturous transformation. The title also suggests fading relationships as well as a fading memory," Chawla explained.

"The Slow Disappearing" has been a "wonderfully cathartic experience for me. It is one-part memoir, three parts fiction. I wrote it after I quit work to be at home with my ageing mom-in-law. I was lonely. After the busyness of corporate life, to suddenly find myself at home rolling out rotis and dispensing care was exhausting, emotionally draining, and mentally crippling. At some point, I started writing my thoughts and the book appeared", Chawla elaborated.

This is the author's third book and for her, writing was a natural progression for someone who began reading Rabindranath Tagore, John Steinbeck, and later J.D. Salinger at age eight and was "also certain" that she could "write like them too".

"My dad was a writer and a lexicographer. He was utterly devoted to his work and spent a good part of the day and night, reading, researching, and writing. He passed his love for words to me, I guess; although, I am more a storyteller and certainly not as erudite.

"I have always been an avid reader ï¿½ when I read the works of Tagore, Steinbeck, and later J.D. Salinger, starting at age eight or thereabouts, I was enthralled. I was also certain (with the naivete of a child) that I could write like them too! Of course, I understand now, how much hard work goes into keeping it simple, straight from the heart," Chawla elaborated.

Annika, the protagonist of "The Slow Disappearing", lives in the US. From being a corporate climber, her world has shrunk to the size of a room, where she now has to take care of an aging mother-in-law. Annika receives a letter from a long-estranged sister (Malavika) with a very colourful past ï¿½ and time present and time past collide, dredging up a host of painful memories. Annika goes home, to immerse the ashes of her mother-in-law, and is forced to meet up with her sister and her nephew Samir. They have a tearful reconciliation and the future looks hopeful at last.

Considerable research went into the book.

"I wanted to write from observations, gathered over decades of life experience - about caregiving, my immigrant life, my relationships. I am, by nature of serious bent, and enjoy movies like "Still Alice", about a linguistics professor diagnosed with Alzheimer's shortly after her 50th birthday, and "A Separation" (that revolves an Iranian middle-class couple who separate and the disappointment and desperation their daughter suffers due to the egotistical disputes and separation of her parents).

"The books I read were not so much for research as for my personal development. I got an additional degree in family cultural studies, which gave me fresh insights into the lives of those around me. Also, I have always been interested in the Indian diaspora and mingle with them at every opportunity, to learn about their immigrant experiences. I believe every bit of knowledge one accumulates along the journey finds its way somewhere in one's work," Chawla said.

As a keen observer of the human milieu, what was the US like when she first moved there and what is it today with renewed racism, the BLM et al? Is it still the land of hope and glory for migrants?

"I moved from Mumbai where I worked as a busy copywriter to a suburb in New Jersey and hated it at first. It was too quiet, too sterile for me. To feel like a child - learn how to cook, drive, shop with a credit card, was humiliating and depressing. I knew and cared very little for the politics of the time and wanted only to ï¿½have a life' again. To be faceless, anonymous, and dependent on my husband for pocket money, was not my idea of married life.

"Racism has and always been alive and well. Whether we see a lot or a little less depends on the politics of the day. The previous occupant in the White House peeled off the thin veneer of ï¿½liberty and equality for all' to expose the dermis of racism. The present one seems more circumspect and honourable.

"To counteract racism, discrimination, biases, I have learned to work harder, keep studying, dress well, and laugh often. Is it still the land of hope and glory for migrants? It depends on who you are asking, and the circumstances that led them to this country. My niece, currently here to study for her Master's, thinks it is wonderful. She feels treated with respect and awaits her future with excitement," Chawla maintained.

What of the future? What's her next project?

"I am a writer. I will continue to write until they pry the pen out of my veined, arthritic fingers (ha ha). I have a manuscript right now that I am polishing and another that I am researching," Chawla concluded.