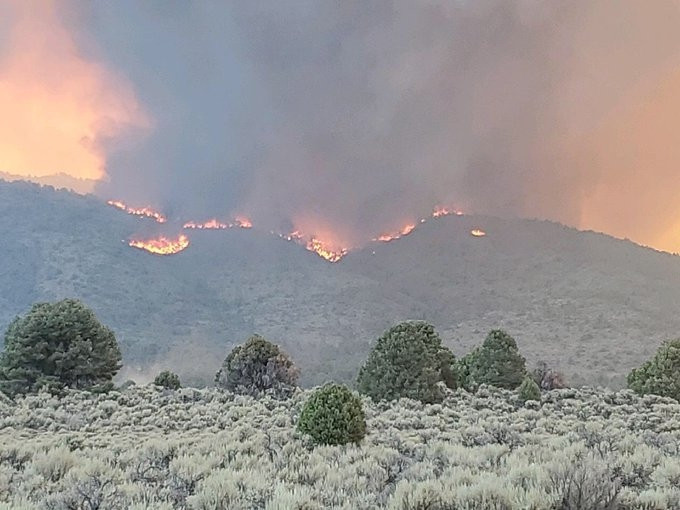 San Francisco, July 24 : More than 14,000 people were forced to evacuate in California after the Tamarack Fire, which has been burning for two weeks, grew to 58,417 acres with only 4 per cent containment, according to local authorities.

Ignited by a lightning strike on July 4 in California's Alpine County, bordering the state of Nevada, the blaze exploded in size on Thursday after sparking a spot fire east of Highway 395, a main route running through the mountains, Xinhua news agency quoted Inciweb, an interstate incident information system, as saying on FRiday.

As the fire rampaged across the highway and became well established on both sides, new evacuation orders were issued on Friday for communities along the highway corridor, raising the number of evacuees to 2,439, local media reported.

The fire also destroyed at least 10 buildings and forced the cancellation of Death Ride, an annual cycling race, leaving thousands of riders and spectators stranded, according to a USA Today report.

More than 1,300 personnel from across the country have been helping battle the blaze, whose quick expansion on Thursday forced them to regroup and take a tactical pause, Inciweb said.

A video clip posted online on Friday shows a group of firefighters driving straight through the inferno but remained untouched, making a narrow escape from the fast-moving Tamarack Fire as they battled it.

Despite lighter winds forecasted for Friday night, fire crews expected the fire to remain active due to the vast amount of dry forest on the ground and heat in the forecast.

"Burning conditions expected to be similar to Thursday with continued extreme to active fire behaviour. Fire spread primarily to the north and east," the Inciweb said, adding the fire could be contained by August 31.