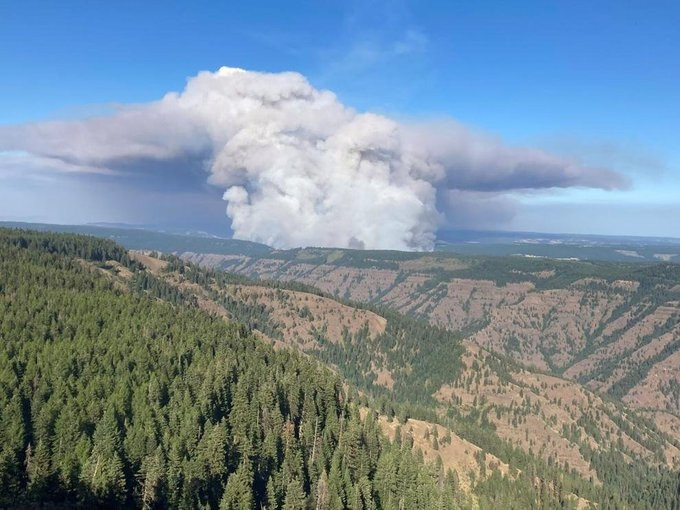 Washington, July 24 : The Bootleg Fire, largest of the more than 80 wildfires raging across the US, has so far scorched over 400,000 acres of land in Oregon state's Lake and Klamath counties, with 40 per cent containment, officials said.

The blaze added about 1,000 acres from Thursday morning, the smallest amount of daily growth since it started on July 6, Xinhua news agency quoted the fire officials as saying on FRiday.

Bootleg Fire has destroyed at least 67 homes and 117 other structures, while more than 2,500 buildings remain threatened, according to the officials.

They further warned that it might take months to fully contain blazes of this size until heavy rain arrives.

More than 2,300 people are battling the blaze.

Officials announced a Covid-19 outbreak among firefighters on Thursday after nine of them had tested positive for the virus.

It is the third-largest wildfire in Oregon in this century, behind the Biscuit Fire which burned about half a million acres in 2002, and the Long Draw Fire which scorched nearly 560,000 acres of mostly grasslands in 2012, according to a report by OregonLive on Friday.

Oregon has been suffering a long-time drought, and the southern area of the state was hit most severely.

The water shortage was worsened by the heatwave that broke all-time temperature records across the region last month.

Both the drought and heatwave were made more likely by human-caused climate change, which scientists have long warned would create larger wildfires, the OregonLive report said.