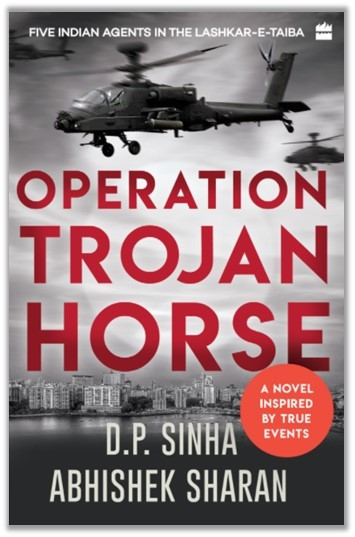 New Delhi, Aug 26 : It is 1996. A sixteen-year-old Lashkar-e-Taiba (LeT) fidayeen crosses over to India from Pakistan. When officer Shekhar Singh of the Counter Terrorism Cell captures and interrogates him, he makes a startling revelation. The terror group has begun sending men to settle down in India in the guise of regular civilians. On the sly, they are to serve as outposts for its missions and destroy the country from within.

Stunned but not shaken, Singh and his bosses decide to take the fight to the enemy camp. Five Indian intelligence agents are planted in the LeT to take on its might and sabotage its operations. And thus is born 'Operation Trojan Horse', a first-of-its-kind Indian counter-terror mission that will go on for years.

"Operation Trojan Horse" (HarperCollins) by Abhishek Sharan and D.P. Sinha is a thriller inspired by real events -- including the 26/11 Mumbai terror attacks and several other LeT operations -- and the true stories of the courageous men who risked their lives in the enemy country for their motherland.

Siddhesh Inamdar, Executive Editor, HarperCollins India, said: "This is a remarkable, explosive book. Authors D.P. Sinha, who spent his career devising counter-terrorism strategies in the Intelligence Bureau, and senior crime journalist Abhishek Sharan have written a novel that is at once an edge-of-your-seat thriller as well as a window into India's fight against terror. Although a work of fiction, it reveals a great deal about India's confident and proactive approach to fighting the enemy that has not been known so far."

D.P. Sinha said: "The idea behind this novel emerged from the multiple counter-terrorist operations, in which I was involved, and my professional experiences. The book is dedicated to the countless undercover agents who have sacrificed their all in the line of duty."

Abhishek Sharan said: "This is the story of India's fight against terror. The book follows police officer Shekhar Singh as he leads the Indian response to foil the plans of terrorist organisations."

Sinha is a former IPS officer who spent most of his career in the Intelligence Bureau looking after counter-terrorist operations. After rising to the post of Special Director in the IB, he also served as Secretary (Security) in the Cabinet secretariat.

Sharan is a senior crime journalist who has been reporting on terror attacks in India from ground zero for the past 20 years. He started his career at The Indian Express and later went on to work for the Hindustan Times, The Asian Age and, most recently, Mumbai Mirror, where he was a senior assistant editor.