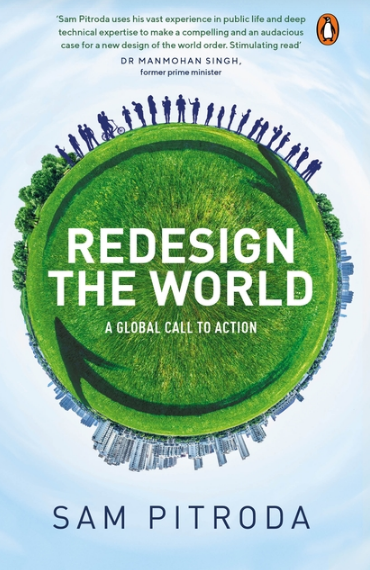 In ‘Redesign the World’, the architect of the Telecommunication revolution in India shows us that we are at an inflection point in history. With his years of experience in the field of technology and extended to the area of the social and political arena, we are urged to prepare for the next stage in global development. It is indeed a galvanizing new work from Mr. Pitroda, who argues that the current systems in place have outlived their utility and cannot work in today’s hyperconnected world.
It is indeed a thought-provoking and brilliant narration of history in a capsule while laying out a case for a whole new approach for this planet and its inhabitants. At the end of the book, a chapter is dedicated as a summary called ‘Manifesto to Redesign the World’ with the outlines for a new world vision. The manifesto is based on optimizing environmental and human capital while focusing on sustainability, inclusion, and a hyperconnected world with a global call to action.
According to Mr. Pitroda, the world’s last design was conceived after World War II with five pillars: democracy, human rights, capitalism, consumption, and the military. The design has served the world reasonably well, preventing another world war, providing nations with economic growth and social development, and lifting millions from poverty. However, conditions have changed due to important world events along with the emergence of technology.
Mr. Pitroda asserts that there are two competing and contradictory visions when it comes to world affairs: the American vision and the Chinese vision. The American vision is open, and assuming those fundamentals that drove the post-world war era policies focused on its dominance in technology, trade, and markets, as well as military matters, should be allowed to continue. However, a closed Chinese vision is quite selective in providing a lead in geopolitical matters but insists on becoming an alternative to the American vision through initiatives like BRI.
Through his manifesto, he proposes a third vision that puts the earth and all living things at its Centre. It is based on nations building a network to increase understanding, enhance collaboration, and build bridges to promote peace and prosperity to all. The five pillars for the world’s redesign are explained as follows: An inclusive world with equality and opportunities for all, fundamental rights to every citizen in the world, a new economy to redress selfish enrichment by few focusing on human capital and environment, conservation and sustainability moving away from mindless consumption and a non-violent environment where all human beings can live and prosper without fear.
Mr. Pitroda shares the belief that there is a crisis of leadership in the world. Many leaders are narrow-minded, parochial, divisive, self-centered, power-hungry, authoritarian, and ineffective. The author demands that we need political will at the highest level and leaders with character, charisma, and global presence to redesign the world. “We must elect leaders with vision, character, capabilities, and commitment towards unity, justice, democracy, and human development. Anti-democratic forces that promote authoritarian attitudes and divisive politics must be rejected”, the author encourages.
As someone deeply involved in promoting technology, he believes that it is a significant social leveler, second only to death. ‘We must believe in science and technology and scientific mindsets, logic, and reasoning. Without science and scientists, there is no future. At the end of the day, innovations will drive and expedite the proposed redesign of the world. “ We need egalitarian architectures with flat organizations to network talent and resources for speedy implementation with openness and accountability,” the author argues.
Mr. Pitroda, in his book, emphasized the need to reform the post-world war Institutions like the UN, World Bank, NATO, IMF, WHO, and others in addressing global issues. However, these institutions have served reasonably well in keeping peace alive and managing financial affairs. A level of antiquity has set in their functioning, and a new global conversation is to reform or rebuild the present apparatus.


This third vision to redesign the world is rooted in democracy and based on the model of universal freedom and inclusiveness. “It gains strength from a new form of capitalism that is multi-polar, open, transparent, collaborative, local, and predominantly focused on what is good for the planet and the people. It is hoped that the reform of existing institutions, the creation of new ones, and the focus of a new global constitution, will ultimately lead the global government to network, communicate, collaborate, and cooperate”. The author concludes that this will be the foundation on which the aims and aspirations of the people of the world will be achieved.
The real question is whether Mr. Pitroda is painting a feel-good panacea that will have very little chance to implement in the real-world politics, let alone explore. I congratulate Mr. Pitroda for dreaming because, without a vision for the future, people may perish. He is one of those stalwarts who has accomplished his dream to catapult India to IT superstardom. However, today, the world is spinning into the opposite direction with hyper-nationalism and narcissist thinking.
There are competing forces that would contribute to our ideas of right and wrong. One is derived from the ancient traditions or religious or moral discourse. The other is the tendency of human beings to look out for themselves and maximize their advantage. Since it is cloaked in the mantle of science, it is the latter that has become increasingly influential in our society today that could even eclipse a great idea like “redesign the world’.

(Writer is a former Chief Technology Officer of the United Nations)