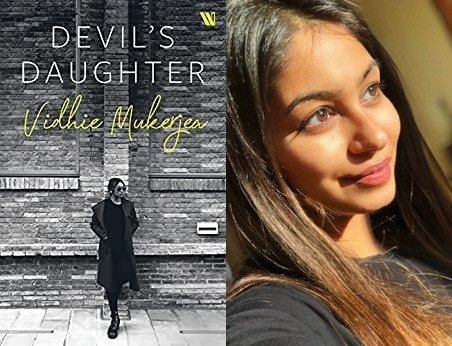 New Delhi, Sep 1 : In 2015, on the eve of her 18th birthday, everything changed for Vidhie Mukerjea, as her mother Indrani Mukerjea was arrested for allegedly murdering her daughter Sheena Bora. A few months later, media baron Peter Mukerjea met the same fate.

Vidhie went to Regent's University London, and over the next few years, maintained a low profile in the media and 'blocked' the incident in her mind.

But with her recently released memoir 'Devil's Daughter' (Westland Books), she assures that now she does not operate from a place of fear anymore as she breaks off layers of her conditioning and past trauma.

"Public scrutiny had its place in my mind as I have memories of how both my family and I were treated by the media. However, this book was merely an expression of who I am as person, an author, and an artist. It highlights my struggles, adventures, and essentially sharing who I am with the world in a raw and authentic form. I was incredibly nervous about having a public presence, but my narrative has given me confidence to be out there and speak about it," she tells IANS.

Vidhie recalls that writing 'Devil's Daughter', which also talks about her anxiety and panic disorder, started as a cathartic release into her laptop with many moments of deep introspection, reliving her past, and going through diverse emotions.

"While also challenging preconceived notion many have about mental health being a taboo topic. Towards the end of writing the book I couldn't stop thinking about various tough situations people are going through with Covid and otherwise, what their headspace was like at the time and realising finally we are all essentially going through the same thing internally," Vidhie says.

She says that while externally our problems may be different, but inside we all feel anxiety, nervousness, depression.

"I wrote it so people felt they could relate to me and I to them."

Stressing that once she started writing, there was no holding back, the author says that her story and journey began to empower her and her purpose.

"Of course, there were moments of doubt, but I was I was reassured by people close to me -- my partner, friends and family," she says.

For Vidhie, writing the book was also therapy. While for the first two years after her parents' arrest, she was constantly escaping her reality, pretending things were entirely normal and that she was an anomaly and would not need to feel those things.

"The longer I deflected, the bigger the hit was. So yes, writing this was like months of intensive therapy for me," she says.

Recalling the media trial that followed, she says it was not just awful and damaging but also draining. "They were ruthless and invasive. It haunts me still because I really kept wondering how people could behave like that. But you know, they tried to ruin us, and they almost did; but because of them I am so much better prepared today. When stuff like this happens, you call them out and hit back. Simple."

Admitting that reliving the past while writing was scary sometimes, Vidhie says that there were days when she felt she would mentally collapse.

"I could not sleep, eat or talk. But I truly believe there is always a deeper lesson or truth to be found in any tough situation. After I went through these moments, I would come out of them feeling so relieved and content."

Adding that it was "inevitable" for her to talk about her anxiety and panic attacks, she feels that we all want to live in a bubble, pretending all is bright eyed. "We are afraid to let people know we are hurting. I wanted to break that chain, life is about being raw and authentic and writing about it just felt incredible."

When the author told her mother about the book, and gave her a brief disclaimer of what to expect, both discussed the context. "I kept pushing and delaying the conversation, but she was quite proud of me when I told her what I would be writing. Frankly, she gave me the last bit of confidence I needed."

The author writes in the book that she does not understand her mother's actions --- "Of course, it's nothing short of tough. But we all make blind decisions, and get lost. I hope to understand her more as time passes."

Currently working on her next book on how to travel sustainably -- backpacking, living in hostels, not having a fixed itinerary, discovering places on the go, cheap transport, immersing oneself in the culture, and understanding what it means to be a local, she adds, "It is about how exposing oneself to a diversity of experiences, people, and perspective can go on to broaden your horizons, and serve as a mechanism for self-reflection and discovery."