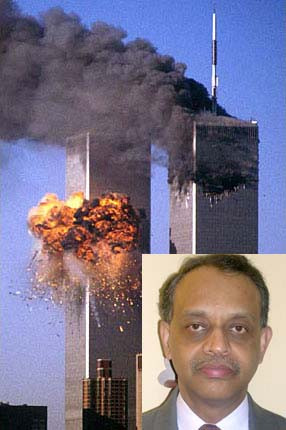 9/11/2001 may be a distant memory, but the terror that shook America is still very much in our thoughts. It was a beautiful and clear sunny day, and I was driving my younger son, Steven, to the United Nations International School in Manhattan. After dropping Steven at school and parking the car at the U.N. garage, I joined the prayer breakfast, an annual event for diplomats from around the world, before the start of the General Assembly on the third week of every September.

The message at the prayer breakfast was plain and straightforward; there is so much injustice all around, and we must not shy away from confronting the evil but do it courageously and assiduously with the divine help. Looking back, I couldn't imagine that the evildoers were busy at work at the same time wrecking lives, wreaking havoc only couple of miles down the street and bringing a nation to a standstill.

As I was climbing the stairs to reach my office, I could feel an eerie silence all around, and there was not a soul to be found anywhere. Finally, I reached a Security Officer and inquired what was happening? He had an offbeat look on his face and said, 'Haven't you heard that the World Trade Center was hit, and the U.N. building has been already evacuated'. I couldn't still fathom the gravity of the situation until reaching a T.V. monitor that had a live feed from the burning Tower 1. The fear and uncertainty surrounding the event were so palpable, and I was not spared either.

I ran to my office and found out that the entire staff had already left the building, and the security ordered the evacuation as a precautionary measure because the U.N. Secretariat building itself could be a potential target. Soon my attention was turned to finding my son, whom I had left at school, and I tried to ring the principal's office, and there was no response. Soon after, I walked out of the Secretariat building to the First Avenue only to hear the sirens of fire trucks and ambulances racing towards downtown.

I felt as if life had come to a standstill on the East side with police blocking all traffic in and out of Manhattan and vehicles stranded in a gridlock mode. I almost ran 20 blocks to reach the school only to learn that the building had been evacuated and the students were sent home. I met few students who had gathered in front of the school, waiting eagerly for their parents or guardians to come around.

As I came out of the school gate still looking for Steven, I found a man totally covered in white ashes walking towards north on the side road of the FDR drive. I inquired and found him totally shaken and hardly audible but understood that the tower had come down, and he was one of the lucky ones either from the building or its surroundings.  I couldn't believe my ears that those towers of grandiose and pride for the big apple were no longer standing. As an early immigrant to this country from India in the late 60's, I have witnessed the construction of these towers and visited them many more times with family and friends.

At that point, I was not sure whether all the occupants of the tower were evacuated. The Restaurant at the top of tower two was a familiar place to me as many of the technical conferences were held there, and I distinctly remembered the service manager and many of the crew who were originally from Bangladesh.

Soon after, I connected with my son, who went to the nearby home of Shashi Tharoor whose sons Kanishk and Ishaan were his classmates at UNIS, and then went on to pick up the car before waiting an hour to reopen the midtown tunnel to reach home.

Only after I reached home, I fully realize the carnage that took place with the collapse of two towers and the body blow it had inflicted on the U.S. psyche. The United States that had not seen a major attack on its soil for nearly 200 years, was shocked to find its financial center and military headquarters Washington hit by a small band of terrorists from abroad. Almost 3000 innocent lives were lost on that day including Valsa John and many other Indian immigrants to this country.

The catastrophe unleashed a sequence of reactions and unintended consequences the country has been dealing with ever since. An unending war on terror, western antagonism towards Muslims, and decline of U.S. power, and Donald Trump's rise, and others like him are all outcomes directly or indirectly related to this earth-shattering event. There is little doubt that the post 9/11 period has seen civil rights being eroded across the world. Many governments have used it as a cover to justify increased surveillance and curbing dissent.

Soon after the attack, America invaded Afghanistan and ousted the Taliban that was providing a safe haven to al Qaeda terrorists who planned and executed 9/11 destruction. By 2011, U.S. forces had also located the mastermind  Osama Bin Laden, who was hiding in Pakistan, and killed him. However, to the warmongers in Washington under George W. Bush, it was another opportunity to expand the power of the military-industrial complex.

At the urging of neoconservatives in Washington, Iraq was also invaded, and the poorly executed and error-ridden plans subsequently destabilized the whole region giving birth to ISIS and triggering a long-running and anti-insurgency campaign. The impact of 9/11 is still reverberating here in the U.S. after spending almost 2 trillion dollars and sacrificing thousands of American and Afghan lives; it is a sad and pitiful  spectacle to see the Taliban government full of terrorists  back in power on this 20th anniversary of the 9/11.

Although many of these geopolitical issues are complex, the world we live in has been indelibly shaped by 9/11 and its aftermath. May I join all of you in paying heartfelt gratitude to all those heroes, including the first line responders who perished in this devastating tragedy and to the families who have suffered the harrowing loss of their loved ones!