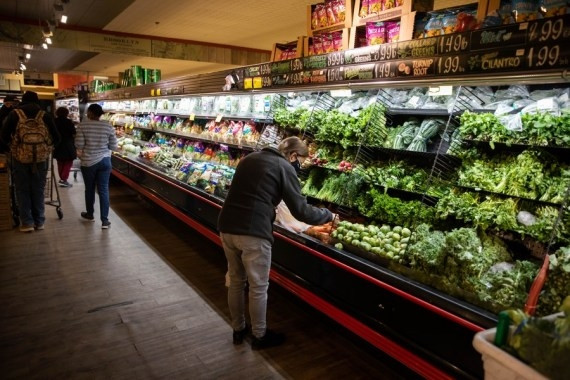 Washington, Sep 15 : US consumer goods prices rose less than expected in August, as inflation showed signs of easing up amid the Delta variant-driven Covid-19 surge and continued supply constraints, the US Labor Department said on Tuesday.

The consumer price index (CPI) increased 0.3 per cent in August after rising 0.5 per cent in July, according to the report released by the department's Bureau of Labor Statistics.

The latest figure is down markedly from the 0.9 per cent growth pace in June, Xinhua news agency reported.

Over the past 12 months through August, the index increased 5.3 per cent, slightly down from the 5.4 per cent pace in June and July, the report showed.

Excluding the volatile food and energy components, the so-called core CPI edged up 0.1 per cent last month after increasing 0.3 per cent in July. In June, the core CPI soared by 0.9 per cent.

Compared with a year earlier, the core CPI rose 4 per cent in August, also a smaller increase than the 4.3 per cent growth in July, the report showed.

"Inflation has begun to show signs of cooling in response to the Delta variant but the level of prices remains extremely elevated, especially for big-ticket items," Diane Swonk, chief economist at Grant Thornton, a major accounting firm, said in a blog.

She noted that new vehicle prices, in particular, jumped 1.2 per cent in August and were up a whopping 7.6 per cent from a year ago.

"Shortages of dealer inventories are so acute that some smaller dealerships are worried about going out of business. They can't carry the costs of overhead without the vehicles to sell," she said.

According to the Bureau of Labor Statistics, the food index increased 0.4 per cent in August after larger increases in recent months, with the index for meats, poultry, fish, and eggs rising 0.7 per cent over the month. The beef index soared 1.7 per cent.

The gasoline index rose 2.8 per cent in August, faster than the 2.4 per cent growth in July.

"The basics of food and energy costs are also elevated, which is crimping consumer budgets," Swonk said.

Swonk also noted that energy prices are expected to move even higher given the damage to refining facilities following Hurricane Ida, which ups the commuting costs for low-wage workers who cannot work from home.