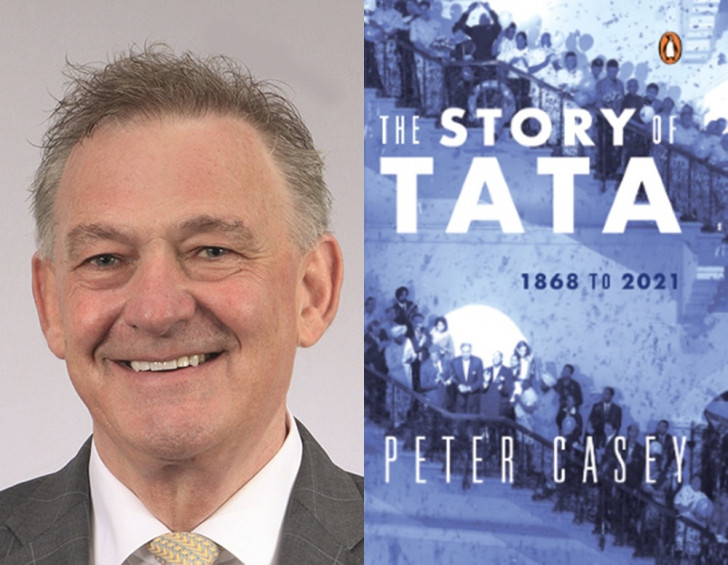 New Delhi, Sep 16 : A conflict of interest with his familys thriving construction business, coupled with a perception that his leadership "would result in the dismantling of the Tata group and reverting it to a collection of standalone companies" -- thus overturning its very ethos of giving back to the people -- led to the sacking of Cyrus Mistry as its Chairman in 2016 after just four years on the job, says a new book on the 150-year-old conglomerate.

And, contrary to the general impression that Mistry's removal was sudden, it was actually three years in the coming, Peter Casey, an accomplished political and business commentator, writes in "The Story of Tata -- 1868-2021" (Penguin) that is based on extensive interviews with insiders in the company.

Considering that Tata had endorsed Mistry's elevation, "he was now keen in handing over the reins. He had frequently remarked, 'I definitely did not want to die in the saddle'. He was looking forward to a year of working alongside Cyrus and affecting a smooth transition", the book states.

What, then, went wrong?

"There appears to have been ample reason for dismissing Cyrus. He had promised the selection committee and the board that he would disassociate himself from the family business. Ratan drew Cyrus's attention to this on numerous occasions, explaining that his failure to do so was a direct breach of the Tata Code of Conduct and Ethics," Casey writes.

"Indeed, on 24 September, 2013, Ratan wrote a very thoughtful three-page letter to Cyrus explaining in detail his deep concern about Tata companies giving business to Mistry family businesses, of which Cyrus was a 50 per cent beneficial owner. There appeared to be a conflict of interest, which Tata Sons could not allow," Casey writes.

There were other concerns.

"No action was being taken (by Mistry) to address business concerns in various operating companies. The group had become too reliant on the profits of TCS and JLR, they believed. Cyrus had surrounded himself with a global executive committee, but very few members of the committee had deep experience in the industries that were the very foundations of Tata," the book states.

There was the question of Mistry giving up his Irish citizenship.

"This was not a prerequisite for his elevation to chairman, but it was nevertheless expected that some preference would be given to an Indian National, since Tata is the largest company in India and the founder was fiercely patriotic...Cyrus is still an Irishman."

There is even more.

"The problem? Tata Motors had not secured prior board approval. To save face, the board approved the massive transaction retroactively. Cyrus also failed to fully inform the board when he directed Tata Power's purchase of Welspun Renewables Energy for Rs 9249 crore ($1.4 billion) on 12 June 2016, without consulting Tata Trusts, the major shareholder of Tata Sons. Tata's Articles of Association require the approval of the Tata Sons board for investment above Rs 100 crore."

More worrying to the board of Tata Sons and the trusts "was the developing view that Cyrus's leadership would result in the dismantling of the group and reverting it to a collection of standalone companies. This created the growing impression that Cyrus was acting not like a corporate chairman, than as a proprietor".

"After more than one instance of disregard for the framework that had been agreed to on his selection as chairman, the board decided that it would be in the group's best interest if Cyrus were replaced as chairman of Tata Sons and as a director of the various operating companies on which he sat," Casey writes.

On the day of the firing a nominated director of the Tata Sons board personally communicated to Mistry the decision which was to be placed before the board. This advance notice was to give him the option to step down voluntarily in a dignified manner.

"He refused, saying 'I'll take this to the board', presumably in the belief that any such move to oust him by the board would be illegal. At the board meeting, there were two abstainers out of the nine members present, and no dissent on the issue of Cyrus's removal," Casey writes.

"This was not a sudden decision...The various breeches of corporate governance norms were brought to Cyrus's attention on several occasions. They were never corrected. Companies and their major shareholders all over the world have faced occasions where they have had no option but to remove or replace chief executives or chairmen. This is the prerogative of the owners and shareholders of the company. Ultimately, they have the responsibility of evaluating the performance (or lack thereof) of leadership. Typically, a dismissed chairman or CEO, including those who are international figures, simply move on. If they negotiate anything, it is no more or less than the terms of their dismissal," Casey writes.

Chief Justice S.A. Bobde wrote: "In fact, it may be conceded today by Tata Sons that one important decision the board took on March 16, 2012 (appointing Mistry as executive deputy chairman prior to his elevation to the top post) certainly turned out to be the wrong decision of a lifetime."

Ratan Tata has welcomed the Supreme Court decision not as a personal victory but as a "validation of the values and ethics that have always been the guiding principles" of the group.

"Thus, Tata Sons will go on doing what no other company in the world does -- What comes from the people should go back to the people. The spirit of Jamsetji may smile in contemplation of this most enduring, most unusual business he created," Casey concludes.