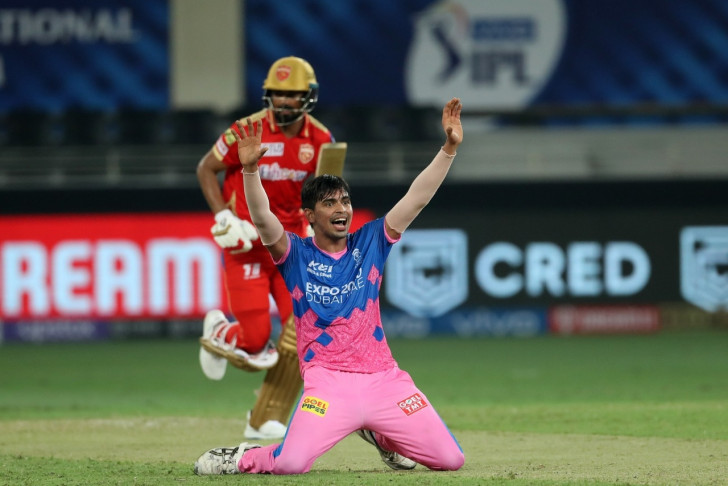 Dubai, Sep 22 : Young pacer Kartik Tyagi's last-over heroics guided Rajasthan Royals to a nail-biting two-run victory over Punjab Kings in their IPL game here on Tuesday.
This game was in Punjab's hands and there was no way Rajasthan would have stolen it. But they did the unthinkable. And also, not to forget the brilliant fielding by Chetan Sakariya at short third man in the 19th over when he saved three crucial runs at death for his team.

Punjab needed four runs in the last over but Tyagi conceded just one run and took two wickets to guide his team home.

Punjab skipper KL Rahul and Mayank Agarwal approached the chase in the best way possible, raising a 120-run stand. The duo punished Rajasthan bowlers to all corners of the ground. Agarwal made 67, while Rahul was unlucky to miss his fifty by just one run.

However, their departure did not dampen the mood in the Punjab camp as Nicholas Pooran and Aiden Markram continued with the momentum and kept hitting boundaries at ease. Bu' Pooran's departure in the last over crushed the dreams for Punjab. And the credit goes to young sensation Tyagi.

Earlier, batting first, Rajasthan made 185 all out with Arshdeep Singh claiming a five-wicket haul. Mohammed Shami picked up three wickets. Yashasvi Jaiswal was the top scorer for Rajasthan with a knock of 49 runs. Mahipal Lomror made a brisk 43 while Evin Lewis contributed with 36 runs.

Rajasthan looked destined for a mammoth total at one stage but then Shami picked two wickets in the 19th over before Arshdeep scalped three in the 20th over to bundle them out.

Whenever RR were on top, Arshdeep was brought back into the attack and he delivered with some crucial wickets. He also became the third-youngest bowler to have finished with a five-wicket haul in an IPL game. Arshdeep has now got the third-most wickets (11) among Indians in the last two seasons in the death overs behind Mohammed Shami (17) and Jasprit Bumrah (13).

Meanwhile, Shami also showed a glimpse of old form while Ishan Porel and Harpreet Brar chipped in with one wicket each. Adil Rashid who was playing his first IPL match was hammered for 35 runs in three overs.