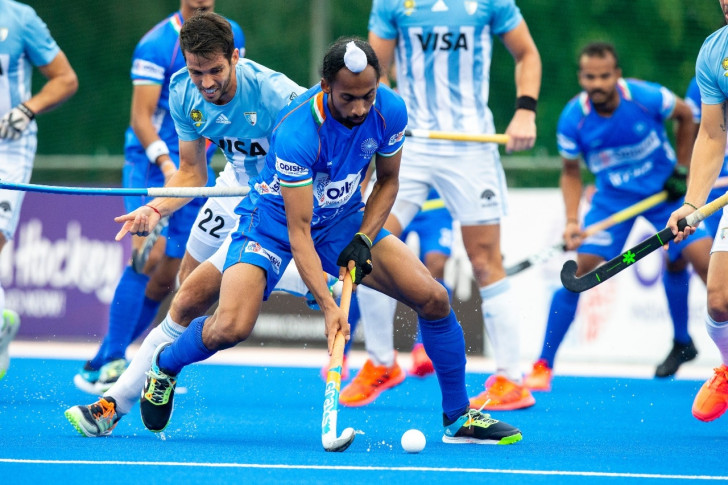 New Delhi, Sep 22 : Young Indian hockey midfielder Hardik Singh said on Wednesday that being a "tight-knit team" was the main reason for the side's stellar show at the Tokyo Olympic Games. India won a medal at the quadrennial showpieces - a bronze - after 41 years.

"We are a tight-knit team, and I think that was our biggest strength at the Olympics. We have formed a special bond, and we were able to master the best out of each other skills. After the disappointing result against Australia (1-7 loss), we sat together and openly spoke to each other about what went wrong and what we needed to do in the upcoming matches to put up a much better performance. That really helped us a lot to bounce back and eventually win the medal for the country," said Hardik.

The 22-year-old, who was one of the key figures in the Indian midfield, scored two crucial goals in his debut Olympic Games.

"After the 2018 World Cup, this (Tokyo Olympics) was my second major tournament with the senior team, and I wasn't really satisfied with my performance in the World Cup. Hence, I wanted to prove myself that I can do better on bigger stages. So, for me, it was a great challenge, and I am glad that I could do well, and was able to contribute to the team's success," explained Hardik.

Hardik scored a memorable field goal in the quarterfinal match against England, which helped the Indian team enter the medal rounds at the Olympics after more than four decades.

While recalling the iconic goal, the youngster said, "It was a team goal, our defence line stuck together to hold the 2-1 lead at a very crucial phase of the game as we were down to 10 men. Harmanpreet tackled the ball really well, he then passed it to me, and I had open space to penetrate into the striking circle, although my shot bounced off the goalkeeper's pad, luckily I received the rebound, and found the back of the net. Nilakanta also played a crucial role here as he blind spotted the goalkeeper, which helped me find the gap during that rebound."

The 22-year-old midfielder further added that the team is eager to begin its quest for gold at the Paris 2024 Olympics.

"We are eager to begin our quest for gold at the Paris Olympics. We will have to approach step-by-step, and our first step will be to qualify directly for the Olympic Games 2024 by winning Gold at the 2022 Asian Games. Then in 2023, we have another marquee event-- Hockey World Cup, which will be played in Odisha, so there are challenging and exciting times ahead, and we are looking forward to it." he concluded.