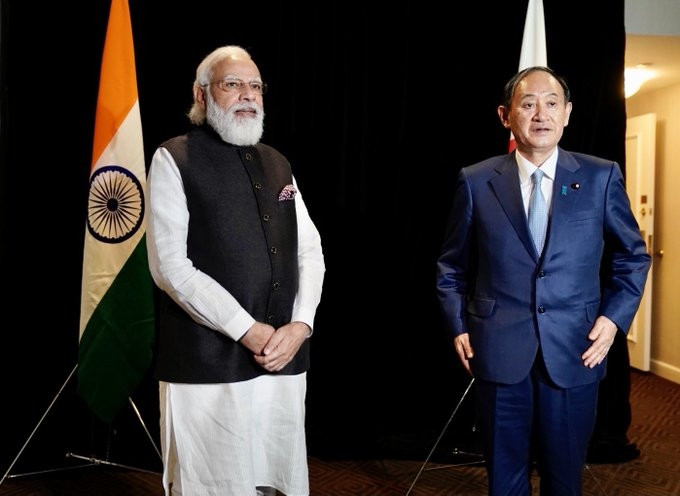 New York, Sep 24
Prime Ministers Narendra Modi and Yoshihide Suga have agreed to promote defence and security cooperation between India and Japan when they met in Washington on the eve of the Quad Summit that brings together the four major democracies of the Indo-Pacific region.

A readout of their meeting on Thursday issued by India's Ministry of External Affairs said: "They reaffirmed their commitment towards a free, open and inclusive Indo-Pacific region. They agreed to enhance bilateral security and defence cooperation, including in the area of defence equipment and technologies."

A Japanese Foreign Ministry statement said that they "shared their strong opposition against economic coercion and unilateral attempts to change the status quo by force in the East and South China seas", according to Kyodo News Agency.

Kyodo said that it was an allusion to "Beijing's assertiveness in regional waters".

During the 45-minute meeting, Suga and Modi "affirmed the importance of realising a 'free and open' Indo-Pacific and agreed to closely work bilaterally as well as with the Quad members to build a rules-based international order", Kyodo quoted the Ministry statement as saying.

Modi and Suga will participate in the summit on Friday with the other two leaders of the Quad, US President Joe Biden and Australian Prime Minister Scott Morrison.

This was Suga's first, and likely last, meeting as Prime Minister with Modi as he has announced his resignation.

The Indian Ministry's readout that focused on the economic aspects said that "they welcomed the launch of the Supply Chain Resilience Initiative (SCRI) between India, Japan and Australia earlier this year as a collaborative mechanism to enable resilient, diversified and trustworthy supply chains".

Prime Minister Suga said "that in order to operationalise the Specified Skilled workers (SSW) agreement which was signed earlier this year, the Japanese side would be undertaking skill and language tests in India from early 2022".

The leaders reaffirmed their commitment to timely completion of the Mumbai-Ahmedabad High Speed Rail (MAHSR) project and noted the progress in bilateral developmental projects in India's North Eastern Region under the India-Japan Act East Forum, the readout further said.

They also touched on a matter closer home to Japan: North Korea.

Suga also asked India to help find "a solution to the issue of Pyongyang's past abduction of Japanese nationals", it added.

(Arul Louis can be reached at [email protected] and followed @arulouis)