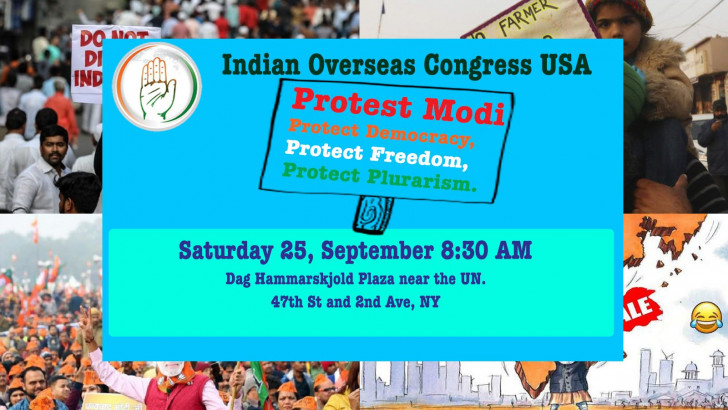 The Indian Overseas Congress is an advocacy organization that promotes democracy, freedom, and justice for all and, in this regard, supports a very strong bilateral relationship between India and the USA and lauds every effort that fosters such partnership bondage, especially to rein in any radical terrorism emanating from Afghanistan.

The IOCUSA, however, expresses grave concern at the faltering economic situation in India, on the gross mismanagement of the Covid-19 pandemic, for allowing the growth of chronic unemployment, for negligently causing total despair and unrest among the farmers due to the promulgation of unfair farm laws, for the dissolution of public sector entities in favor of private enterprises, and the brutal attack and manipulation of religion on the very sensitive secular fabric of India. Hence, IOCUSA wishes to highlight and condemn the Modi Administration’s disappointing misgovernance and lack of honesty in dealing with critical issues affecting India and the undemocratic policies and practices.
The IOCUSA also expresses its extreme disappointment with the Narender Modi-led NDA Government with the tackling of the Covid, especially the second wave that hit the country in March 2021. There was a lack of effective disaster management in utilizing existing resources and facilities in tackling one of the biggest crises that the country has faced in several decades. The total mismanagement of the second wave resulted in a large number of deaths across the country that are still not fully accounted for. The IOC, USA blames the Prime Minister for not releasing factual figures and information on the second wave and misleading the nation on this critical issue.

IOC.USA believes that the Modi government should be held responsible for the rampant mob attacks on minorities triggered by vitriolic statements by leading BJP leaders spewing the communal venoms of prejudice and hatred. The Delhi riots were nothing but a byproduct of the hate-driven policies this administration has been pursuing. Under the BJP rule, civil society is increasingly being hand-cuffed with canceling their FCRAs and even forcing some of them out of the country. The press is being muzzled, and with the judiciary under pressure, the institutions which Nehru Ji and Ambedkar Ji built are under severe stress. The draconian UAPA is being used to stifle personal dissent, and people are labeled anti-nationals for merely expressing opinions critical of government policies.

IOCUSA stands firmly in solidarity with the protesting farmers in India who have been denied their rightful voice and concerns to be heard on the unlawfully and surreptitiously passed Farm bills. The IOC, USA also voices its deep concerns on the security of India, especially given the increased threat from China, Pakistan, and now Afghanistan. The IOC, USA, wants the Narender Modi Government to release all facts correctly on the level of threat to India’s security and the measures undertaken by the Government to counter them.

IOCUSA strongly condemns the undemocratic and corrupt means of bringing down elected state Governments in India by the Narender Modi-led government through illegal and unethical means, thereby rejecting the people’s mandate belittling the constitution. The IOC.USA also calls on the Prime Minister to respond to the people on various issues concerning the country and request the Prime Minister to address the media in New York and later in India, pursuing a policy of transparency and telling the truths.

The IOCUSA expresses its appreciation and total support for the repeated caution and pleas of Congress MP Shri Rahul Gandhi to the Government on the subject of the second wave of the virus, which was ignored and mocked, resulting in a catastrophe in India. Last but not least, the IOCUSA expresses its unequivocal solidarity and concerns with the people of India during these difficult times.