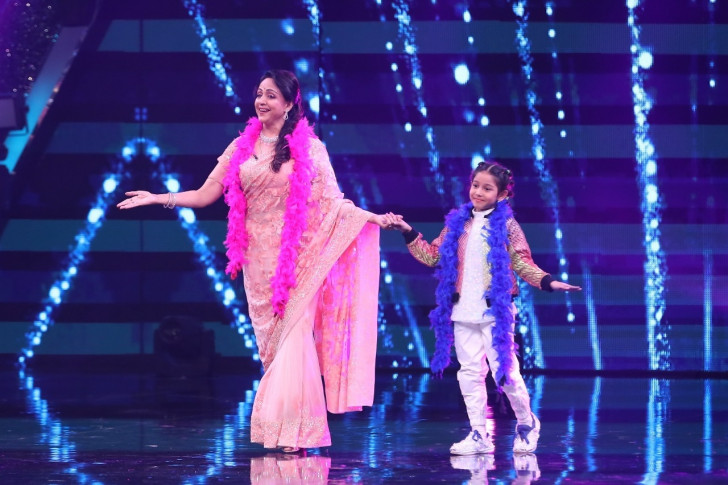 Mumbai, Sep 25 : Bollywood star Hema Malini will be on dance reality show 'Super Dancer: Chapter 4' as a special guest for a special episode dedicated to her this weekend. The contestants and their gurus will be seen performing on some of her hit tracks.

Among all those performances, it is contestant Florina and her guru Tushar Shetty who amazed Hema Malini most with their dance moves. They perform on 'Zindagi ek safar hai suhana' from the 1971 film 'Andaz' starring Shammi Kapoor and Rajesh Khanna with her. Hema Malini also tries to match Florina's dancing steps.

Hema Malini, who seems mesmerised by their performance, praised them saying: "What should I say? I don't understand! This little girl, how does she do all this? I just wonder! And Tushar, you have trained her so well. I like this concept of guru-shishya. I have seen her perform many times and I really love the way you dance. Great! God bless you."

Going down memory lane, she also narrates an interesting incident related to the song.

She reveals: "One day director Ramesh Sippy Ji informed us that the whole song will be picturised on a motorbike. I was a little shocked and wondered what do we do? The first time I sat behind Rajesh Khanna Ji on the bike, I asked whether he knew how to ride or not? After that, as soon as the song played, he started jumping and all! The only thing he didn't do was stand on the bike, but this is what he was asked to do, and finally he did that exceptionally well."

The grand finale of 'Super Dancer: Chapter 4' - 'Nachpan Ka Maha Mahotsav' - will be held on October 9.