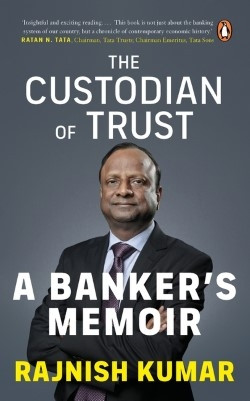 New Delhi, Oct 9 : This is a highly anticipated account of some of the critical periods in the history of Indias financial sector by one of the countrys most talented and established banking professionals in the country, Rajnish Kumar, former Chairman of State Bank of India (SBI), Indias largest commercial bank.

"The Custodian of Trust" (Penguin) is the story of Rajnish Kumar's incredible journey as a banker. Debuting as a writer with his memoir, Kumar shares his stories - from being a probationary officer in SBI to becoming its chairman in 2017 - capturing the many changes he witnessed in India's banking sector during his career. Recounting his experiences about the aftermath of demonetization; challenges in YES Bank; the crisis in Jet Airways and NPAs, this book is anecdotal, engaging and thought- provoking, and will attract a wide spectrum of readers.

"I am pretty excited to share my journey of 40 years with State Bank of India and offer glimpses of my personal life," Rajnish Kumar said.

"SBI is considered a proxy to the Indian Economy. In that sense, the book is also an account of the tremendous progress made by the country as well as the banking and financial system in the last four decades. The removal of poverty has been the biggest challenge and banks have played a critical role in the fight against poverty. There are many untold and unknown stories in the book, which I am sure readers will find interesting and inspirational," he added.

Even before its official launch, "The Custodian of Trust" has received generous praise and endorsements from the stalwarts of India Inc. and the banking industry. Ratan Tata, Chairman Emeritus, Tata Sons, remarked that "this book is not just about the banking system of our country, but a chronicle of contemporary economic history". Uday Kotak, CEO, Kotak Mahindra Bank, said about the book: "It has the potential to be a Bollywood blockbuster."

Premanka Goswami, Executive Editor at Penguin Random House India, said: "Rajnish Kumar assumed the responsibility to lead the country's biggest commercial bank at a critical time when India's financial sector was going through a turmoil. ‘The Custodian of Trust' opens a window to these times. We, at Penguin House Random House India, are excited to publish Kumar's memoir."

Rajnish Kumar joined SBI as a probationary officer in 1980. He served the bank in various capacities across the country and overseas. Prior to his appointment as Chairman, he was Managing Director (National Banking Group) at the bank overseeing the Retail business and Digital Banking. He was Chairman of the Indian Banks Association and served on the boards of many other companies while serving SBI.

Currently, he is a director on the boards of HSBC Asia Pacific, L&T Infotech Ltd and Lighthouse Communities Foundation. He is also an exclusive advisor to Kotak Investment Advisors Ltd and senior advisor to Baring Private Equity Asia Pvt Ltd.