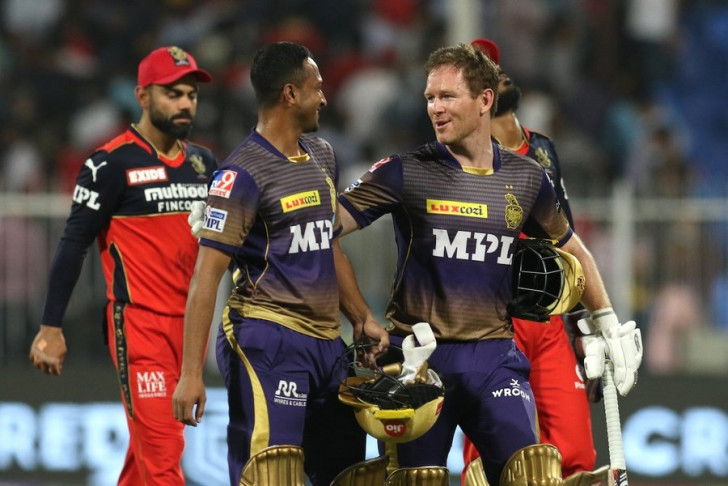 Sharjah, Oct 11 : Kolkata Knight Riders edged past Royal Challengers Bangalore by four wickets in a tight Eliminator match of IPL 2021 at the Sharjah Cricket Stadium here on Monday. Kolkata chased down the target of 139 with two balls to spare. They will now face Delhi Capitals in Qualifier 2 for a place in the final against Chennai Super Kings.

Shubman Gill started off with a flick through square leg of Mohammed Siraj. In the next over, Venkatesh Iyer joined the party, pulling George Garton over backward square leg. Gill then tore into Garton in the third over with a hat-trick of boundaries. Harshal Patel, introduced in the final over of power-play, made the first strike for Bangalore as Gill was foxed by an off-cutter and holed to mid-on moving to his right.

Post power-play, Kolkata lost another wicket as Rahul Tripathi was struck plumb on the front pad by a Yuzvendra Chahal googly. Nitish Rana broke the shackles with reverse hits going for a six and four each off Glenn Maxwell in the tenth over, which also saw a running Shahbaz Ahmed spilling a catch of Iyer. But in the next over, Patel took out Iyer, gloving behind to keeper KS Bharat.

Sunil Narine's promotion to five paid off as he slammed three sixes off Daniel Christian over fine leg, square leg and long-off in the 12th over to simplify the equation. Chahal had his second wicket of the match in the 15th over as Nitish Rana mistimed slog-sweep to long-on. Narine had luck on his side as Devdutt Padikkal dropped the catch off Harshal Patel in the 17th over.

In the next over, Narine swiped across the line but saw his off-stump disturbed by Siraj. One brought two for Siraj as Dinesh Karthik nicked behind to Bharat. With seven needed off the final over, Shakib Al Hasan walked across for a scoop over short fine leg off Christian before finishing off the chase with a quick single.

'Bambooka', a bicycle made of bamboo costs Rs 5Ok

Google marks the birthday of judo's founder with doodle