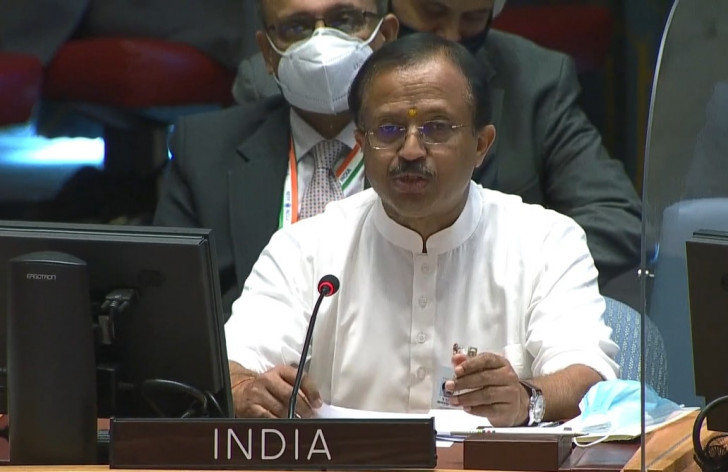 United Nations, Oct 12 (IANS) India on Tuesday hit out at double standards in fighting religious phobias that ignores "anti-Hindu, anti-Buddhist and anti-Sikh phobias" and thus encourages those propagating those ideas.

Sounding an alarm on the "newer form of religious phobias", India's Minister of State for External Affairs V. Muraleedheeran told the Security Council: "Our inability to even acknowledge these atrocities and phobias only gives those forces encouragement that phobias against some religions are more acceptable than those against others."

"If we chose to be selective about criticising such phobias or ignoring them, we do so at our own peril," he said at the high-level debate on "Peacebuilding and Sustaining Peace: Diversity, State Building and the Search for Peace".

Putting a spotlight on the "double standards", Muraleedheeran said, "While we have condemned anti-Semitism, Islamophobia and Christianophobia, we fail to recognise that there are more virulent forms of religious phobias emerging and taking roots, including anti-Hindu, anti-Buddhist and anti-Sikh phobias."

"We have seen in our own neighbourhood and elsewhere the destruction of temples, glorification of breaking of idols in temples, violation of gurudwara premises, massacre of Sikh pilgrims in gurudwaras, destruction of Bamyan Buddhas and other religious iconic sites," he said.

While anti-Semitism and Islamaphobia figure often in speeches by UN officials and many members states, there is a silence on bigotry targeting some other religions.

Secretary General Antonio Guterres said there was a "sharp increase in the number of non-state armed groups" like rebels, insurgents, militias, criminal gangs, and terrorist and extremist groups that "coalesce around joint identities, or shared beliefs".

One of the ways of countering these trends, he said would require "implementing policies and laws that protect vulnerable groups - including laws against discrimination based on race, ethnicity, age, gender, religion, disability, sexual orientation or gender identity".¿

The debate was presided by President Uhuru Kenyatta of Kenya, which holds the rotating presidency of the Council this month.

Muraleedheeran said that India offers a "unique manifestation of unity in diversity, where inspite of the convulsions caused by the partition, we still came together as one to form a democratic, pluralistic and inclusive society with our Constitution as the basic bedrock of our polity".

Invoking the lessons taught by Mahatma Gandhi, he said: "If one were to talk about embracing diversity and inclusion, India has much to offer on how diversity of identities, whether ethnic, regional, religious, linguistic or others, can come together and live as one nation a" the common thread binding us, being the identity of being an Indian first, and all others later."

"We believe in ethos of tolerance and understanding, practicing the age-old ethos of Vasudhaiva Kutumbakam - The Whole World is One Family," he added.

Muraleedheeran praised South Africa, which transitioned successfully from apartheid to free and open society; Cote d'Ivoire, Liberia, Sierra Leone, Rwanda, and Burundi, which have been examples of successful transition from conflicts to peace, and South Sudan, where such a transition is in progress.

Fawzia Koofi, who had served as the Deputy Speaker of the Afghanistan Parliament, was invited by Kenya to speak at the debate.

She said: "The future of my country is the latest test for whether we can come together as a global community to uphold the principles of the UN Charter in the face of adversity."

"We have to come together to hold the Taliban accountable for what's happening in my country. There are serious reports that fundamental freedoms are being floated. women and girls are once again regarded as second class citizens. Literally, they are making us invisible, again," she said.

Referring to Afghanistan, Muraleedheeran said: "The change in authority in Kabul was neither through negotiations nor inclusive. We have consistently called for a broad-based, inclusive process that involves representation of all sections of Afghans."

He said it is important to ensure that commitments on combatting terrorism are respected and adhered to.

(Arul Louis can be reached at [email protected] and followed @arulouis)