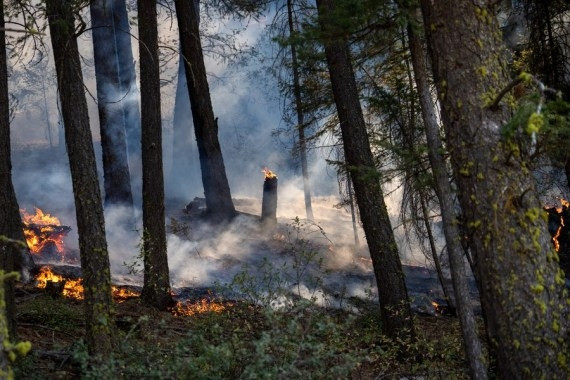 Los Angeles, Oct 13 A fast-moving wildfire in southern California expanded to over 13,400 acres (54.23 square km) with 5 per cent containment by Tuesday, triggering evacuation orders and the closure of a major highway, according to Inciweb, an interstate incident information system.

The Alisal Fire started Monday afternoon near the Alisal Resevoir, north of the US Highway 101 along coastal Santa Barbara County, Inciweb said, adding "the fire is burning in dense chaparral and grass and is being pushed by strong winds and growing at a rapid rate of speed."

Santa Barbara County Board of Supervisors has declared a local state of emergency for the Alisal Fire. Evacuation order and warnings have been issued and remained in place by Tuesday for the areas threatened by the fire, Xinhua news agency reported.

Officials said more than 600 firefighting personnel are working to contain the blaze which is threatening at least 100 structures, including ranches, farms, homes, state campgrounds and railway services.

Statewide, wildfires have burned over 2,487,000 acres (10,065 square km) and destroyed or damaged more than 3,600 structures so far this year in California, according to the California Department of Forestry and Fire Protection's latest updates.