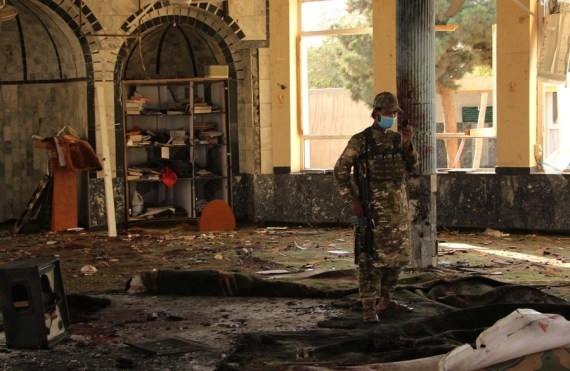 Lucknow/Mumbai, Oct 16 (IANS) After two Shia mosques in Afghanistan were bombed in a span of one week killing hundreds of worshippers, Shia Muslim clerics in India have slammed the silence of Sunni clerics on the targeted killings which have increased after the war-torn country was taken over by the Taliban in August.

Speaking to IANS on the phone, top Lucknow-based Shia cleric Kalbe Jawwad said: "No Sunni Muslim clerics have come out to condemn the killings. We have supported them when any such incident happens... And this is not happening for the first time but from the last 25 years.

"If the Sunni Ulema from India and Pakistan start condemning the killings, then such incidents will not happen. But their silence is tacit support to the killings."

He also alleged that the killings are result of a conspiracy by the US Israel, Saudi Arabia and Pakistan to wipe out the Shias since the past three decades.

The cleric added that the Islamic State (IS), Taliban and other terror organisations have been operating with the support of US Israel and Saudi Arabia

He said the Taliban has deceived the Shias by saying that everything will be normal and then cheated the community by killing them.

Another cleric from Mumbai, Maulana Ashraf Zaidi told IANS over the phone that the incidents were condemnable and requested the Indian government to take the matter to UN.

"I request our government to take the persecutions of Shias in both Pakistan and Afghanistan to UN as a sensitive country we should pay our attention on such incident."

The Islamic State (IS) terror group on Saturday claimed that its Khorasan branch (IS-K) carried out the twin bombings inside the Shia mosque in Kandahar a day ago, that claimed the lives of 63 people while injuring 83 others.

Friday's attack came exactly after a week when another Shia mosque in Kunduz city was hit by a suicide bombing which claimed the lives of at least 50 people.

The IS-K had claimed responsibility for the attack, which was the deadliest since the US forces left Afghanistan at the end of August.