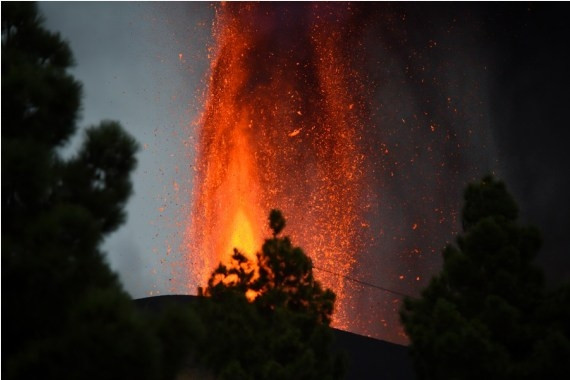 Madrid, Oct 17 The Spanish island of La Palma was hit by 36 earthquakes in the last 24 hours, as the ongoing eruption of the Cumbre Vieja volcano continued for the 28th day, according to local authorities.

A quake measuring 4.6 on the Richter Scale hit in the municipality of Mazo at a depth of 37 km at 4.41 a.m. on Saturday, the Spanish Geographical Institute (IGN) said, adding that it followed by another 4.5-magnitude temblor at 6.07 a.m., in the same area, reports Xinhua news agency.

The quakes were measured after the volcano opened another mouth on the south-east face of its main cone Friday night.

The fissure mouth has started ejecting ash and pyroclastic material.

The volcano continues to behave in a "Strombolic" manner, with periods of high explosivity and others of relative calm, although TV images show what has been described as a fast-moving "tsunami" of lava cascading down its slopes.

Island authorities calculate that 732 hectares of land have been affected by the lava, leading to the destruction of 1,548 buildings according to the Copernicus satellite and causing the evacuation of over 7,000 people since the start of the eruption on September 19.

The current eruption has already lasted longer than the 1971 eruption, which was the last to affect the island.

Earlier on Thursday, La Palma was once again rocked by more than 50 tremors.